Behind the written word: A look at some of the most enduring personal brands of classic literature

If you happen to follow this blog at all, you’ve probably noticed that many of the personal brands we feature here are faces from the world of TV, fashion and film. While we’ve touched upon literary brands in the past (my J.K. Rowling post, and more recently, a guest blog by writer Lucy Austin ), this summer we thought we would feature those authors that have exceptional and enduring personal brands – not an easy feat when your work is communicating through the written word!

Since there so are many extraordinary authors worthy of mention, we’ve only highlighted a select few here, spanning the genres of drama, comedy, fantasy, horror and romance. These are the authors who succinctly express their brand through their work, provoking that feeling of familiarity and anticipation when you pick up their book. Furthermore, as outer branding is also an important part of the whole brand package, these authors are instantly recognisable to most, whether you’ve ever picked up one of their works or not.

This month, we start with a nod to our classic (yet well preserved!) brands. 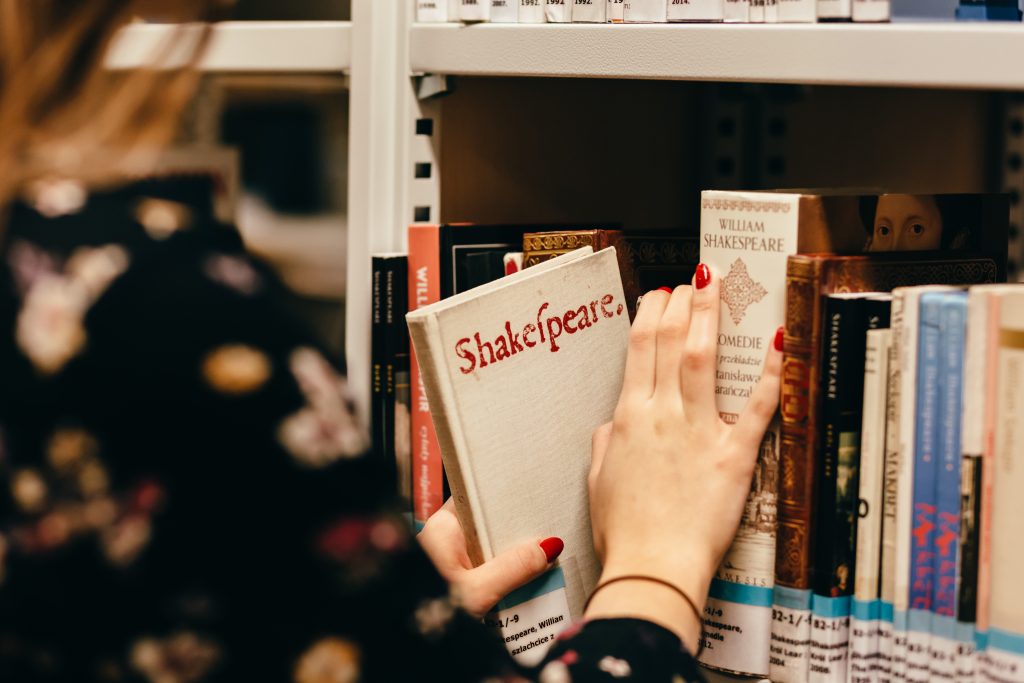 Of course, we had to start with…

Shakespeare has to be one the very first authors with a strong personal brand. His distinct outer brand is recognisable everywhere: the pronounced forehead, the flowing locks and trademark Elizabethan ruff, often accompanied by his quill.  Interestingly, he was one of the first non-royals to appear on a British £20 note. Now that’s a strong brand! 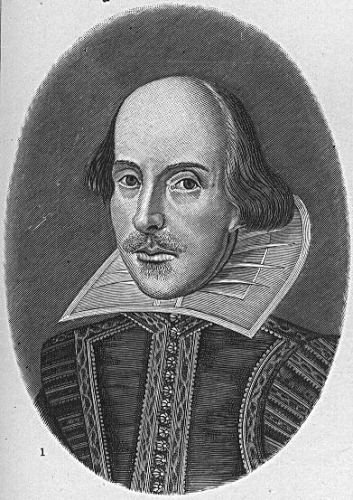 Shakespeare may not have been the only playwright and poet using iambic pentameter, but he is the author we most associate it with (and consequently. the one most likely to get pupils groaning). Shakespeare’s brand has been part expressed through sonnets, personal words of love dedicated first to a young man and then a mystery woman, “The Dark Lady”. However, he was also known for taking historical stories and tales and then weaving plays out their bare bones (certainly reflecting an “alchemist”  archetype side to his brand!). Whether it’s a comedy like Much Ado About Nothing or a tragedy like Macbeth or Hamlet, Shakespeare’s compelling brand lies in his words. We can watch King Lear in medieval costume, Victorian garb or modern-day dress, yet his captivating story doesn’t change; the power of Shakespeare’s language carries it through, often addressing the very existential nature of life itself:

“To-morrow, and to-morrow, and to-morrow,
Creeps in this petty pace from day to day,
To the last syllable of recorded time;
And all our yesterdays have lighted fools
The way to dusty death. Out, out, brief candle!
Life’s but a walking shadow, a poor player,
That struts and frets his hour upon the stage,
And then is heard no more. It is a tale
Told by an idiot, full of sound and fury,
Signifying nothing.” – William Shakespeare, Macbeth

Austen is also instantly recognisable by her period appearance, in her case the Regency look with pearls, demure lace neckline and often a mob cap.

Austen and her books were famed for their sharp wit, and characters like Mrs Bennett still make us laugh today. Her clever sense of humour was widely adored, and at its peak she parodied the new wave of gothic bodice rippers in Northanger Abbey, which has interestingly lasted longer than the tranche of books it pokes fun at.

But, scratch the surface and you will see that Austen’s subject is quite serious: the choices open to women at that time. One either had to marry for money and position, or for love, and run away to live in destitution.  It was a feminist statement in its own way, and possibly why the Suffragettes carried Jane Austen on their banners. Today, her image is more widely seen on the £10 note.

“Give a girl an education and introduce her properly into the world, and ten to one but she has the means of settling well, without further expense to anybody.” ― Jane Austen

Dickens, even in silhouette, can be instantly recognized as the epitome of the Victorian man with his smoking jacket and sometimes rather wild beard. Dickens has delighted many generations with his iconic characters such as Miss Haversham from Great Expectations, who keeps her house in the exact state it was the day she was jilted at the altar, and Ebeneezer Scrooge from A Christmas Carol,  whose story has become part of the Christmas tradition itself.  Dickens also wove his own personal experiences into his books.  For David Copperfield, he adapted his experience as a twelve-year-old condemned to work in a London warehouse by his family’s near destitution.

While his memorable characters speak volumes to the creativity (and personal history) that propelled his brand, there is another, more humanitarian and socially responsible side to Dickens that gives his brand added depth.  It’s quite apparent that he was in tune to the societal issues of his time, bringing awareness to the abusive treatment of the poor in stories like Oliver Twist, the corruption of the law in Bleak House and the appalling factory conditions instigated by the industrial revolution in Hard Times.  He may make us smile, but he also makes us think.

“A wonderful fact to reflect upon, that every human creature is constituted to be that profound secret and mystery to every other.” – A tale of Two Cities, Charles Dickens

His name alone conjures up images of ravens, black cats and all things gothic. Our Master of the Macabre is considered one of the most important and influential American writers of the 19th century.  A masterful storyteller, Poe used psychological depth and symbolism to transform the genre of horror stories.  His chilling poem, The Raven (published in 1845 in the New York Evening Mirror) is considered among the best-known poems in American literature. Horror classics such as The Tell-Tale Heart, The Fall of the House of Usher and The Pit and the Pendulum further reveal the sheer talent and unique vision behind his brand.

In addition to capturing our imagination with evocative tales of horror, Poe is credited with inventing the modern detective story with The Murders in the Rue Morgue. His concept of deductive reasoning (termed by Poe “ratiocination”) inspired countless authors, most famously the creator of Sherlock Homes, Sir Arthur Conan Doyle. He is also widely regarded as the architect of the modern short story, and an early pioneer in the genre of science fiction.

He also knew how to differentiate his name, an impressive branding move. The famous “Allan” wasn’t originally part of his name (after all, Edgar Poe would sound a bit too average!); he added the surname of his surrogate parents later in life.  Similar to his literature, many aspects of Poe’s life are shrouded in mystery, with fact and fiction having been blurred significantly since his death. Nearly two centuries after his death, the dark and fascinating mystery that defines his brand lives on in our collective imaginations.

“Deep into that darkness peering, long I stood there, wondering, fearing, doubting, dreaming dreams no mortal ever dared to dream before.” – Edgar Allan Poe

I wanted to give a big nod to the Brontë sisters here, a fascinating example of co-branding! 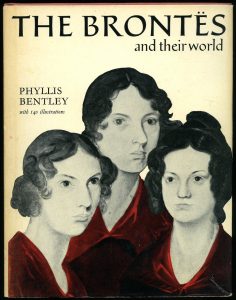 The Brontës and their World, by Phyllis Bentley

The Brontë sisters were part of the most influential literary family in history. Charlotte, Emily and Anne, who all began to write during a very young age, are credited with radically reshaping the literary conventions of the Victorian era. Their novels explore topics of passion and vice that still resonate with us today.

Their writing was brilliantly used as a form of expression to share dimensions of their brand that weren’t considered socially acceptable in women of the day. Charlotte, for example, was described as small in stature and “could be dismissed as an unassuming country mouse”. Her writing, however, revealed a very different side to her brand, an underlying passion, boldness and ambition. The sisters’ pen names, Ellis, Acton and Currer Bell, were all initially male, a necessary strategy at the time that also created for a hugely dichotomous side to their personal brands.

Just a brief summary of the three sisters’ most notable work: Anne’s Agnes Grey and Charlotte’s Jane Eyre were published in 1847, with Jane Eyre becoming one of the best sellers that year. Anne’s second novel, The Tenant of Wildfell Hall and Emily’s Wuthering Heights,  were both published in 1848. While The Tenant sold well at the time, Wuthering Heights did not. However, Emily’s novel went on to become a masterpiece, heavily influencing readers for generations to come, including singer songwriter Kate Bush, who wrote her hit song Wuthering Heights in 1977 and even named her house in England after the novel.

The Brontë home in a remote part of West Yorkshire, England remains hugely popular and gets thousands of visitors a year.

And last but not least, one of my personal favourites: 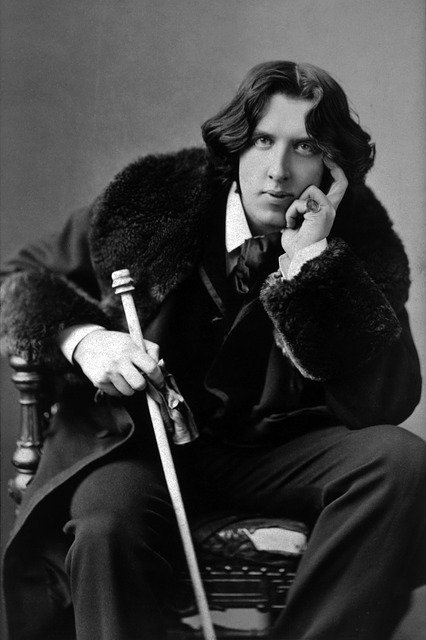 The quintessential dandy, Wilde is hailed for his sharp wit, humor and flamboyant dress. He is also notorious for conviction for sexual indecency at the time, and has become a gay icon as well as a literary one. Originally from Dublin, Wilde adopted London as his home after studying at Oxford. A poet, journalist and author, Wilde is best remembered for his novel The Picture of Dorian Gray where his protagonist has a painting in the attic that keeps him young, and the play The Importance of Being Earnest, studied by British school children for generations. Wilde was known to be as witty a character as the ones in his writing; his unique style of writing brilliantly reflected his own unique personal brand.

At the height of his literary fame, Wilde was convicted of sexual indecency with men and sentenced to two years in prison, where he wrote De Profundis (Latin: “from the depths”), his famous letter to former lover Lord Alfred “Bosie” Douglas.

On his release, he left for Paris never to return, and died in poverty. Nevertheless, his great wit lives on, the image of the long-haired dandy, often in his suit, fur coat and with his walking stick, remains an instantly recognisable one today.

“Be yourself; everyone else is already taken.” – Oscar Wilde

To me, this pithy little gem beautifully captures the importance of authenticity in personal branding. You’ll even find these words of Mr. Wilde on this very website.