Goodbye to the Last Great Dandy. My Tribute to Lagerfeld

In lieu of a “Brand of the Month”, I felt compelled (like so many) to pay tribute to this visionary designer.

With his passing, fashion has lost a genius and an icon. For decades, Lagerfeld oversaw the creative direction of two major fashion houses (something truly rare in the industry), alongside of directing his signature brand. The bio on his website described him as “a force of nature, coupled with an enigmatic persona and an original perspective on fashion and pop culture.” Lagerfeld was effortlessly unique and memorable. He possessed razor sharp wit, an extravagant flair and a penchant for the more cultured and lavish things in life. Perhaps he was the last great dandy.

Lagerfeld ticked all the boxes of a strong personal brand. Then there were those elements that catapulted him into brand legend status, making him iconic. 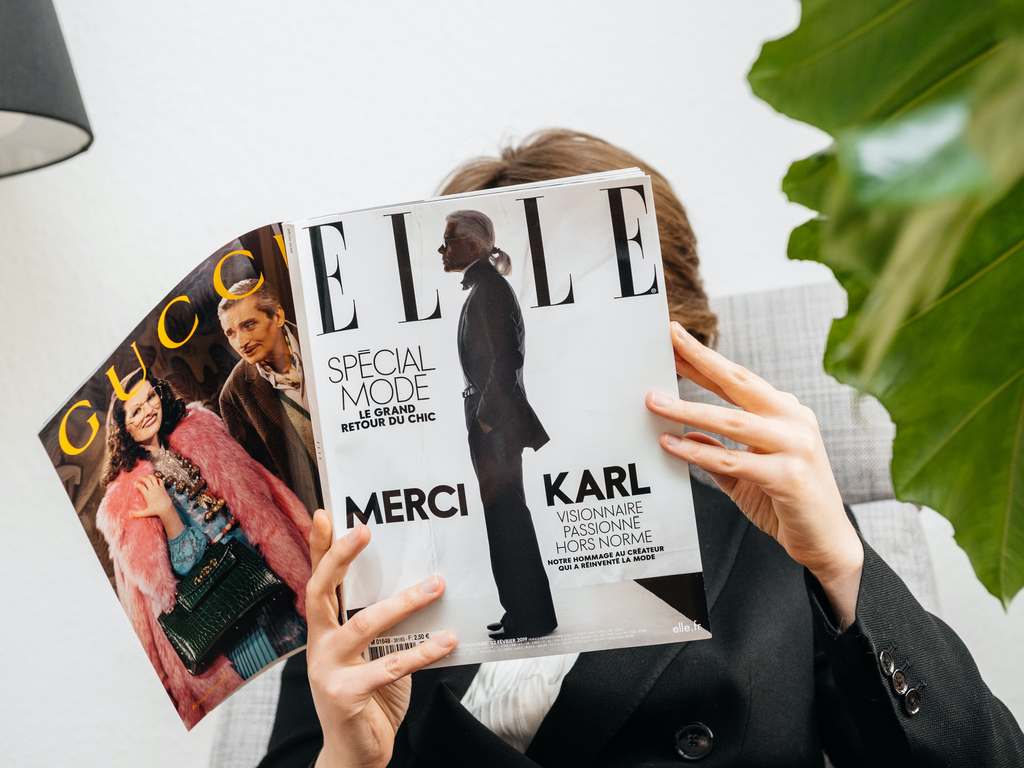 It started with an insatiable appetite

From a young age, Lagerfeld described a burning desire to escape the German countryside of his childhood. He once told The Independent, “I always knew what I wanted. As a child, I wanted Austrian lederhosen. I always wanted to be different from other people. I hated children. I was born with a pad of paper and a pencil in my hand. I was looking at images before I could read.” You might say he had a voracious appetite for self-improvement. In the 2015 documentary Karl Lagerfeld, a Lonely King, Lagerfeld also shared that as a child, he learnt a page of the dictionary almost every night. As an adolescent, his mother took him to his first fashion show in 1949, where a revelation and the birth of his fashion ambition were born. This sparked his journey.

With the blessing of his parents, Lagerfeld left home at age 14 for Paris, where he finished his education and achieved early success. A gifted sketcher, he submitted a series of designs to competitions and received a prestigious design prize in 1954 (aged 21), an accolade he shared with Yves St Laurent. The competition landed him an apprenticeship to Balmain (one of its judges), followed by a stint at Jean Patou. In 1964, he joined Chloé, followed by the furrier Fendi in 1965, with whom he stayed until his death. Then, in 1983, he arrived at Chanel.

And boy did he arrive.

A dash of Alchemy

From a branding perspective, Lagerfeld effectively engaged an alchemist archetype.  Alchemists work their magic to turn “lead into gold”, old into new. This is exactly what he did with Chanel.

Coco died in 1971, and a decade later her label was in the doldrums, reliant on fragrance and “suit sales to middle-aged women”. Lagerfeld’s job was to resuscitate it, and drag the dated fashion house into the present. When he took over the creative reigns at Chanel, he almost single-handedly restored it to a position that commanded revenues in the billions.

He explained: “Chanel was dead and everyone said don’t touch it. Now, of course, everyone is reviving brands.” In Karl Lagerfeld, a Lonely King, he quotes Goethe as inspiration: “making a better future with the expanded elements of the past.” He not only managed to turn Coco’s house around and make Chanel the  status label, but he also added a dash of fun and edginess to the brand. According to an interview with the New York Times Style Magazine, his self-professed secret was “to keep working harder than anybody else and to scent newness while renovating tradition.”

And that’s what alchemists do, they work hard at making something that is deemed worthless or mediocre into something meaningful and powerful. Lagerfeld was known as the most frenetic of fashion designers; his workaholism was an established part of his brand and he created more than four times more on average than his colleagues (he designed some 14 collections a year).

The alchemist also creates experiences where their audience feel transported to somewhere magical or different from their day-to-day lives. Our magician did just that nearly every fashion week, creating spectacular Chanel sets that dazzled and transported his audiences. 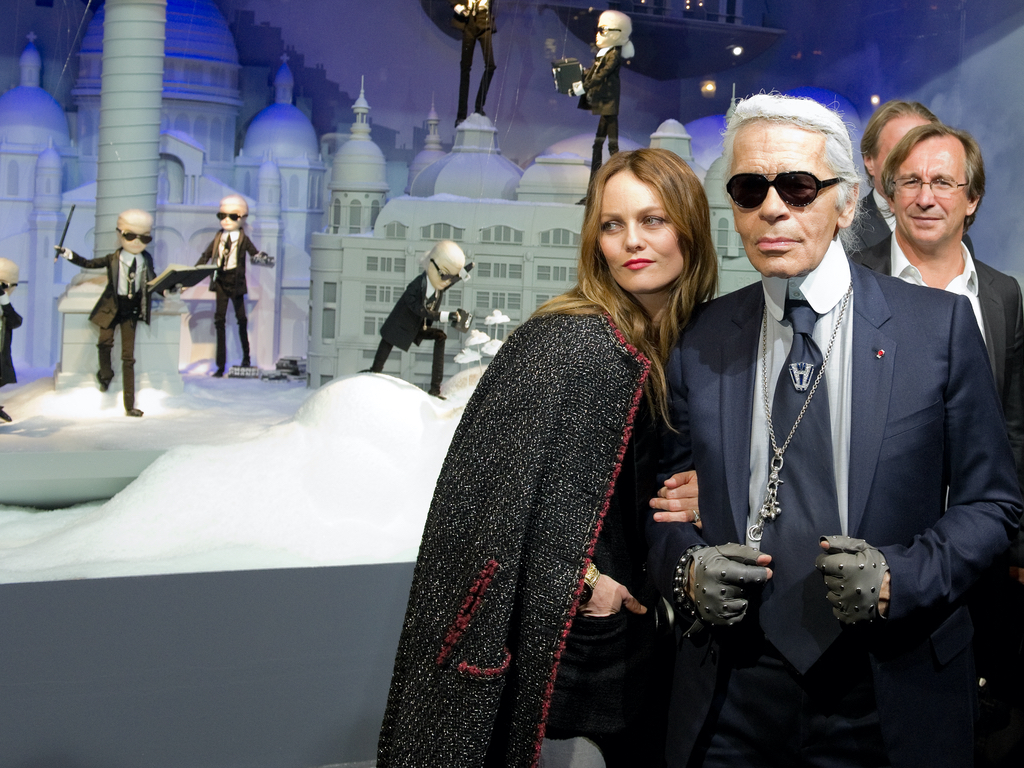 Vanessa Paradis and Karl Lagerfeld during the light period of Paris for Christmas, Nov 2011. Photo: Shutterstock

Of course he also did some magical things with Fendi shows; case in point, in 2007, the world saw the first-ever catwalk show on the Great Wall of China.

Just as he transformed fashion houses and catwalk experiences, he also had transformed himself. Vogue described Lagerfeld as “the master of reinvention”; he transformed his life at an early age and forged a powerful identity in fashion. He created an almost magical lifestyle for himself, photographing fashion for magazines, publishing poetry, creating art and even owning a bookshop, all alongside of directing Chanel, Fendi and his eponymous label.  His book, The Karl Lagerfeld Diet, became an international bestseller.  He became knowledgeable about things such as opera, furniture and architecture. He owned a vast library in his Parisian home (which is estimated to house over 300,000 books) and could read in several languages. As observed by Andrew O’Hagan during an interview for New York Times Style Magazine, “He wants to present the best of all possible worlds and impose his own philosophy of improvement.”

Lagerfeld also co-branded magnificently, teaming up over the years with brands like Macy’s and H&M, along with some more unexpected collaborations such as with Audi, Volkswagen Golf, Coca-Cola and Magnum brands. But perhaps his most surprising co-branding was with Andy Warhol.  The documentary Karl Lagerfeld, a Lonely King highlights Lagerfeld’s fascination with world of Andy Warhol, and so he agreed to be in a Warhol film in 1973.

The unique embellishments (his outer brand)

The ponytail, the fingerless gloves, the dark glasses, stiff white collar, the diamante belt buckles, tie broaches and rings. Just those descriptors alone are as defining of his brand as his name. Chances are most people can identify Karl Lagerfeld, even if they know little about who he is. His image is instantly recognizable (even from the back!), an Nike swish of the fashion world. Lagerfeld started adopting some of his first style signatures – dark glasses and a ponytail – as early as the late Seventies. He had created and maintained one of the strongest, most consistent and enduring outer brands of our time.  Karl Lagerfeld became a logo in his own right.

As far as I’m concerned, the epitome of strong outer branding is having a doll made in your likeness. Not only were their Lagerfeld dolls and figurines, but his image appeared in everything from cartoons, colouring books, and even a video game. 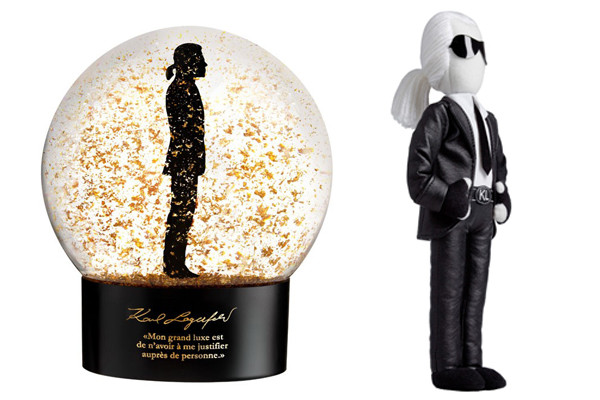 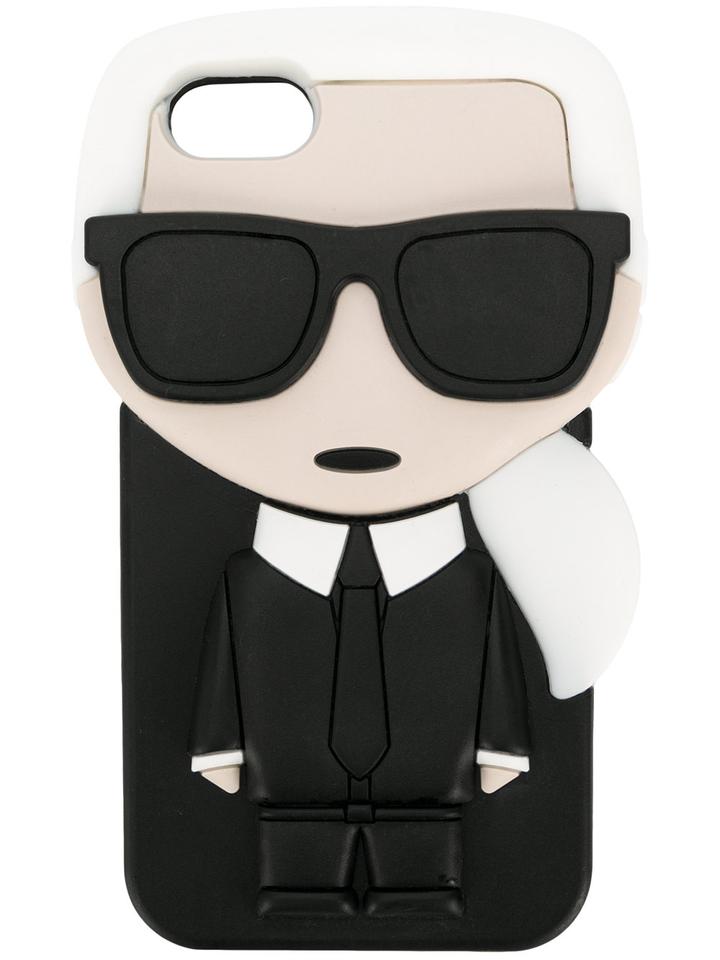 And then there’s my personal favourite, the Karl Lagerfeld Barbie doll (2014): 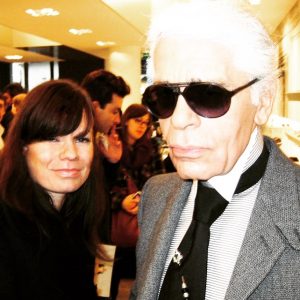 Forgive my fringe! Me rubbing shoulders with Lagerfeld in Paris, 2010, at a Colette launch for his “mini Karl” doll.

As Andrew O’Hagan observed in the New York Times Style Magazine interview, “There is something complete about the Lagerfeld look. The stiff white collar, the fingerless gloves, the dark jacket and pants, the rings, the dark glasses and the ponytail. When I was with him, his face was an even mask of light foundation and his hair was powdered. He has fleshy lips, Oscar Wilde lips, and a sparkle in the eye that one only sees with his permission, when he dips his glasses to let you see that a joke has made its way through to the smart interior.” A sophisticated and structured exterior did not necessarily mean there was an absence of humour. Lagerfeld could also parody himself, as seen below carrying a tote bag that read ‘Karl Who?’, which was also printed on T-shirts.

Mixed with a sharp edge

Lagerfeld’s sharp wit, his way with insults, his outrageousness; of course his brand was not without controversy.  In the days following his death, anecdotes came flooding in, and not all were gracious.  Rachel Cook, former stylist for Lagerfeld, described in The Guardian how she saw it from both sides: “the brilliance at the drawing board, and the bully who didn’t like to see his female employees in flat shoes. One doesn’t necessarily cancel out the other.” Alexandra Shulman described locking horns with him on a few occasions over something she had published in British Vogue, and shared how Lagerfeld once wrote to her that “nobody would ever buy [her] magazine again”.

As Cook pointed out, it wasn’t that long ago when the designer “had called the singer Adele “a little too fat”, accused “fat mummies” of being envious of thin models, and dismissed the #MeToo movement” (to name a few controversial moments).

Even after death, the controversy swirls, as his beloved cat, Choupette, is said to potentially inherit millions to continue her “lavish lifestyle of flying private jets, being doted on by a team of maids and eating from silver dishes”. Perhaps Mademoiselle Choupette wouldn’t mind sharing some of those millions with animal charities to help some of her less fortunate four-legged friends? In all fairness, it should be noted that Lagerfeld was considered a big charity-giver but wouldn’t necessarily talk about it.

Controversy and edge aside, he became a supreme taste maker who used the powerful ingredients of his own brand to cross generational lines and dictate style to the masses. The Lagerfeld brand was, and will continue to be, associated with sophistication, charm and wit.

So perhaps he really was the last great dandy.
A bejeweled 21st century Dorian Grey with a pony tail.