The “Brand of the Month”…is in conflict

In lieu of our traditional Brand of the Month, I’m taking this month to explore a brand conflict, that of…

Our favourite cockney Naked Chef often comes to mind during the festive season. Whether it’s for a traditional Thanksgiving dinner for Americans, Christmas recipes, dinner parties or just quick dinner ideas, Oliver has become our trusted go-to gourmet guy. And just this month, he announced his plan for international expansion, with the Jamie Oliver Group opening 19 new branches and rebranding two Jamie’s Italian restaurants in Asia. This comes just months after the UK chain’s collapse.

As many will know in the UK, Oliver has become a figurehead for campaigns for healthier kids and a healthier planet. His brand has made tremendous strides in the last decade, positively impacting school meals, government initiatives on obesity, and climate change. As such, both his personal and corporate brands have become synonymous with a healthier future. Not to mention his impressive range of cookbooks, TV shows and restaurant chains that have helped make him a household name.

But Jamie Oliver has had a tough year, and both his corporate and personal brand have taken a big hit.

The most glaring is of course is the loss of his restaurant empire back in May. His 25 restaurants went into receivership, a British form of bankruptcy protection, at a cost of about 1,000 jobs. Oliver followed the announcement with “a high-profile apology campaign, admitting his glaring faults as a business owner and vowing to keep going with the food ventures that made him a star at just 24 years old”. This collapse comes after months of financial struggle, which may explain his co-branding misstep earlier in the year…

Regardless of whether you drive or not, you’ve probably heard about Oliver’s “healthy” deli range at Shell Petrol Stations, Jamie Oliver deli by Shell, by now. The range was made available in 500 Shell service stations since early this year.

Truth be told, when I first saw this branding partnership early this year, my initial thought wasn’t a thought at all. It was a cringe. This isn’t all that surprising considering the visceral reaction that strong brands can elicit. But if we take a moment to think about this co-branding, on one level it does make sense. Healthier on-the-go options at petrol stations are much needed, and Oliver is a huge advocate for making healthy food choices more available to the masses. As a result of this partnership, 80 healthy food items are now available to a wider range of consumers.

But there’s another dimension to this co-branding that just feels off. A huge part of Oliver’s personal brand is being a vocal UN environmental campaigner, and paring with an oil giant feels like a gross misalignment between his corporate brand and his personal brand, and it’s tarnishing both. Jamie Oliver deli by Shell feels like a different brand to that of the Jamie Oliver who lobbied hard for the sugar tax, campaigns for climate initiatives and wants to save the world one school lunch at a time. Strange bedfellows indeed.

Shell’s marketing strategy on the other hand was a shrewd one, given its mission to shift its image, particularly as the brand has consistently topped the list of the most hated brands in the UK. The marketing team have also been clever, clearly having fun with this venture: ‘From A to BLT’, ‘A new direction for food on the go.’ Partnering with a brand like Oliver’s could certainly work to improve Shell’s reputation, however Oliver appears to be getting the short end of this branding stick. 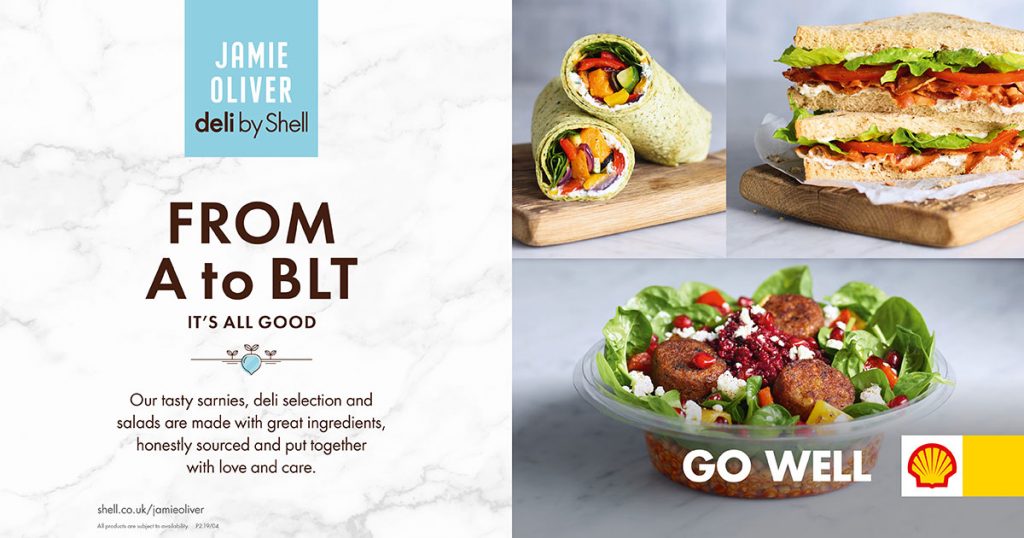 In defence of this £5 million partnership, Oliver shared, “I think I’ve earned trust over the last 20 years and I would hope that people think I’ve thought about it correctly. I can stick up for what’s in the stores and where it’s come from.”

It’s true that Oliver has built an admiring following over the past two decades, and we know in branding that such a reputation is steadily earned over time. However we also know that it can be wrecked in a heartbeat.

But if Oliver does in fact go back to his celeb roots – the Naked Chef days and what made him a star at age 24 – our celebrity chef’s brand just might emerge stronger and healthier in 2020.