Image, colour and style are obviously important if you’re building a following on Instagram, and there’s no one who does all three in quite the same as Courtney Quinn. Courtney, who runs two successful Insta accounts, @colormecourtney and @colormemagic, is a candy-themed sensorial delight to follow. Every post shows real joie de vivre and vibrancy, and you can’t help but smile as you peruse her photos. To get an immediate sense of her personal brand, all you have to do is check out one of her YouTube videos like this one:

While her image may look light and frothy, her credentials are not. Courtney boasts an MBA in marketing and worked with brands such as Coach, Timmy Hilfiger and Kate Spade before deciding to take her blog full-time. Indeed, Courtney’s blog was started to help her get a footing in the fashion industry when she found that her MBA was getting her nowhere. And look how it worked! 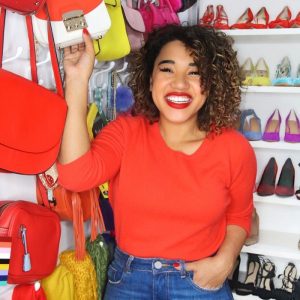 One big draw to Courtney’s pages is approachability. She shares details of her life in New York with her boyfriend Paris and her paralysed French bulldog, Waffles, who even has his own hashtag, #waffiegram. Paris is also her photographer, although they occasionally share the limelight on posts.

Nevertheless, a smart business woman appears throughout. Posts on both her Insta and her website take you through how to “get the look”, involving purchases that range from a 37- dollar scarf to a rucksack for just under 1k. She has collaborated with brands that include Birchbox and Adidas, and talks openly about making money from both affiliate links and sponsorship. She also has her own range of merchandise, including sweatpants, bandanas, and phone cases. Courtney’s YouTube figures aren’t too shabby either, with around 7.75k followers, and viewings will also be providing Courtney with a nice residual income.

Courtney’s authenticity shines through her work. In a blog post she talks about the importance of having a budget. It was, admittedly, a sponsored post, but she talked through how Paris had paid off their student debt, put money aside for a wedding, and starting saving for a house. It portrays Courtney as a great role model, as does another recent Instagram post where she talks in frank detail about the amount of work that has gone into building up her account, including the ten hours a day she still spends on her business.

The role model brand is more than just icing on a few Instagram and blog posts. Courtney obviously takes this seriously, as April saw the launch of her mentorship programme for young women of colour. The idea behind it is to give them access to experiences like New York Fashion Week, and open doors to them in the fashion industry. It’s something that she is working on with one of her partners, Uber, and she documents a snippet of it here.

Courtney has appeared in Essence, Teen Vogue, and Yahoo Finance. She talks a lot about how her business is built around herself, i.e., her own personal brand, and how any sponsorships or collaborations need to be in alignment with her brand. As she says in Teen Vogue, “my personal brand is my north star that guides all my decisions.”

You can find Courtney on her website and of course on the socials: