With the launch of “Inventing Anna” on Netflix, the Female Con Artist is having a moment. A handful of professional scammers have made their way into the media recently, most famously “Anna Delvey”, the 31-year-old European sham heiress who immersed herself in the world of New York’s elite just five years ago, scamming hundreds of thousands of dollars out of friends, banks and investors. So I felt compelled to visit darker side of personal branding: Scam or Con brands, which, I have to admit, is perhaps the most fascinating (and disturbing) intersection between psychology and personal branding yet. But how do con artists like Delvey pull it off? 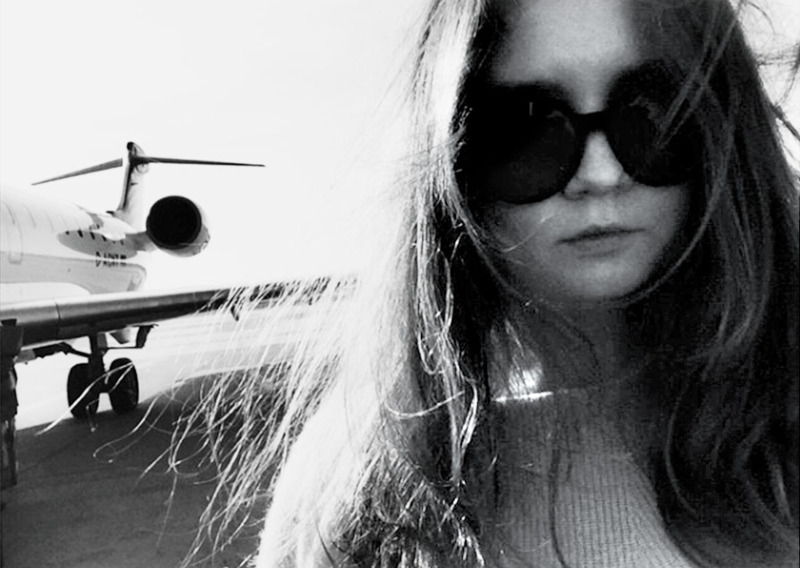 Delvey’s selfie on Instagram. She once managed to hire a private jet for $35,000 with a forged wire transfer confirmation

Chances are you’ve already gotten hooked by the wild story of Anna Delvey. But if the name is new to you, I strongly suggest you check out these captivating pieces in Vanity Fair and New York magazine detailing her extensive con artistry, which included everything from“cheque-kiting” (depositing bad cheques and then withdrawing the money before they bounced) to scamming companies into giving her money for elaborate “projects”, all while living a lavish lifestyle well beyond her means.

A quick synopsis of this grifter gal: the daughter of a truck driver, Anna Sorkin grew up in Russia and spent her adolescence in a small German town. After rebranding herself as Anna Delvey, a German heiress, she hatched an elaborate scheme, allowing her to scam enough money for the launching pad she needed to make a splash in the Big Apple. And what a splash she made. As New York’s Jessica Pressler documented, “through a web of lies, wire transfers, and the right RSVPs, Delvey secured hotel rooms and nearly founded a ‘Soho House–ish type club’”.  She spent long stays in five star hotels, took luxury holidays, and injected herself into the art, fashion, and banking circles, while conning professionals such as architects, lawyers and investors to help found her private members club, “The Anna Delvey Foundation”. Eventually the gig was up, as banks and hotels did their due diligence and exposed Delvey as the fraud she was. Delvey is currently incarcerated without bail in Rikers Island jail and faces multiple grand larceny charges.

The burning question everyone on everyone’s lips is how in the world she got away with it for so long. From my view, it certainly looks like good ol’ sociopathology meets some impressive personal branding strategy, mixed with a little luck (and maybe a knack for forging or repurposing bank documents!).

As Josh Glancy describes, “she needed a heavily curated brand, one that people would find familiar enough not to query. In this case, jet-set Euro trust-fund baby with grand plans to open a knock-off Soho House-style club.” She spent years cultivating her fraudulent brand, posing as a well-connected heiress who was seen at the most happening parties and events and lived out of luxury hotels, all while not actually having any money.

In addition to curating the right personal brand for the scam, she positioned it exceptionally well.

The right moment, the right signals

Delvey got her foothold when interning for Purple magazine in Paris, when she latched onto the social circles of the magazine’s editor-in-chief. Delvey saw an opportunity that gave her the veneer of credibility she needed to launch her brand in New York. Soon Anna had become a figure on the NYC social scene and was seen at the most happening parties. She managed to be at the right place at the right time, and always looked the part. One acquaintance who met Anna in 2015 at a party thrown by a start-up mogul in Berlin comment that “She was wearing really fancy clothing” — Balenciaga, or maybe Alaïa — “and someone mentioned that she flew in on a private jet.”

She’d taken to hosting large dinners at the swanky downtown restaurant Le Coucou, which were attended by CEOs, artists, athletes and celebrities. She also dropped the right names; those of the New York elite, such as Aby Rosen, giving off a signal of status to those in the know.A ripe zeitgeist

Delvey was also savvy enough to target the right city as her mark, and at the right time. Josh Glancy points out that she possessed an instinctive sense of how to exploit contemporary New York: “Con artists reflect the time they live in because they demonstrate what people want to believe. So Anna Delvey was the perfect scam merchant for the age of the influencer. If Kim Kardashian can waltz into the Oval Office to discuss prison reform, might Delvey not also acquire the life she longed for by creating a seductive avatar? Aside from the criminal fraud, this is what other influencers do all the time.”

Today’s social media also provided the perfect platform for exhibiting her elaborate hoax. Take, for example, a selfie posted on Delvey’s now defunct Instagram (where she had over 40k followers): her trademark oversized sunglasses, with a private plane behind her; #Basel (the lavish art fair); a comment from a follower: “Nice jet. Yours? Impressive.”

A marked target audience (or “targets” in this case)

Delvey honed in on her targets and seemed to have an agenda for each of them. Flashing cash (she wasknown for handing out crisp $100.00 tips like leaflets), hosting extravagant parties and picking up the tabs (or so people had thought) gave credibility to her brand. As Jessica Pressler pointed out in her expose: “Anna looked at the soul of New York and recognized that if you distract people with shiny objects, with large wads of cash, with the indicia of wealth, if you show them the money, they will be virtually unable to see anything else. And the thing was: It was so easy.

Delvey clearly used the right props – people and money – and knew the right tricks. The “friends” and hangers-on she accumulated served to enable Delvey to perpetuate the myth around her brand, essentially by being paid off or getting sucked into the bright, shiny world of the rich and famous. As her former friend described in Vanity Fair: “It was a magic trick—I’m embarrassed to say that I was one of the props, and the audience, too. Anna’s was a beautiful dream of New York, like one of those nights that never seems to end. And then the bill arrives.” 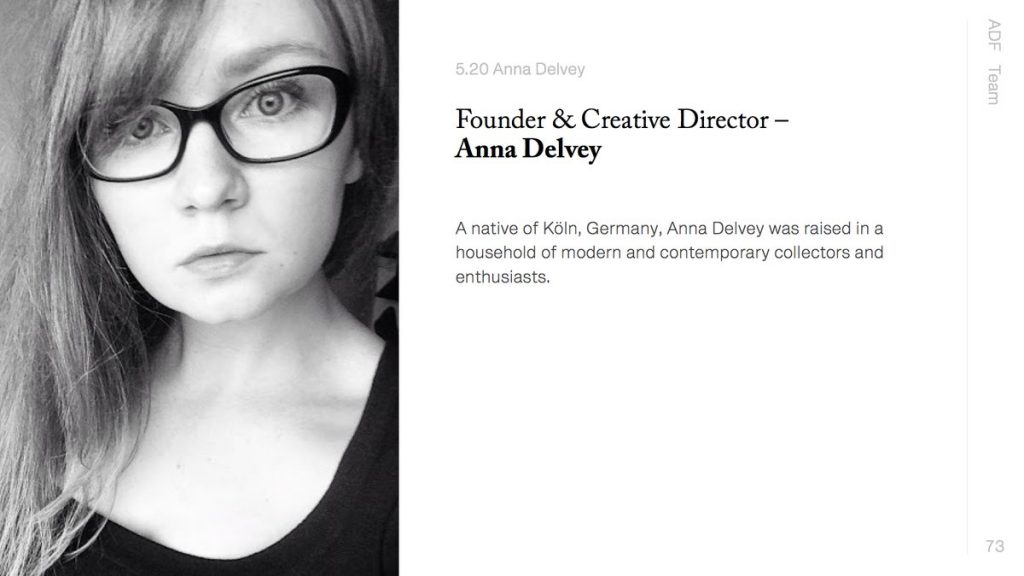 Delvey scammed a top NY architectural design firm into creating a visual identity and pitch deck for her “Anna Delvey Foundation”. Designer Marc Kremers stated on Twitter: “As a designer I find it so crazy that my services were used to trick banks and hedge funds out of $28,000,000. I still have the keynote. It’s not a pitch deck, it’s a work of fiction. It’s graphic design weaponised as an instrument of grand larceny.”

But pull a thread…

Once you pull a thread, however, scam brands tend to unravel quite quickly.

Putting all the personal branding, business savvy and artistry aside, let’s not forget there was significant psychological disturbance at play here. When sociopaths are called out, they often default to a disassociated response…think deadpan, emotionless expression and vacant eyes. Like others in my profession (and in the courtroom), I’ve seen this firsthand in my clinical work. This is also what former friend Rachel DeLoache Williams reported when she confronted Delvey: “Against the raised voices and direct accusations, Anna’s face assumed an unsettling blankness. Her eyes were empty. I suddenly realized that I didn’t know her at all.”

She certainly didn’t. Aside from the destruction they do along the way, perhaps the most unfortunate part of a scam brand is the shallowness that’s often left after their scam brand inevitably crumbles. Despite the shiny facets to their strong (but deceitful) brand, a weak foundation often resides underneath;  you almost certainly won’t find core branding attributes like authenticity and empathy (and certainly not remorse), as these are mostly foreign to the sociopath’s brain. Justice Diane Kiesel has already noticed this in the courtroom with Delvey: “I see no remorse…She seems more concerned about who is going to play her in the movie than what she’s done to the people she allegedly took advantage of”.

But just when we thought the patina of the personal brand that once dazzled New York had faded, this grifter continued to make a name for herself even from the confines of Rikers Island. And now that Shonda Rhimes has brought the story of Anna Delvey to the small screen, she’s back in the media spotlight. After all, given the success of past blockbusters like Catch Me if You Can (also based on a true story), perhaps it’s not all that surprising that Delvey’s story captured the attention of Rhimes.

And as unsettling as this all may be, just like a car crash, I’m sure there are plenty of us who will want to slow down and take a peek…

2 thoughts on “When personal branding meets con artistry: A look inside Scam Brands”