Welcome back to our Brand Transition Campaign. Meet Jess Baker, an independent Business Psychologist and Women’s Leadership Coach who discovered her authentic personal brand when she moved from a fast-paced London life to a rural dream in Shropshire!

Tell us a bit about who you were before the change? What was your personal brand (i.e. how other people perceived you)? What were you known for? 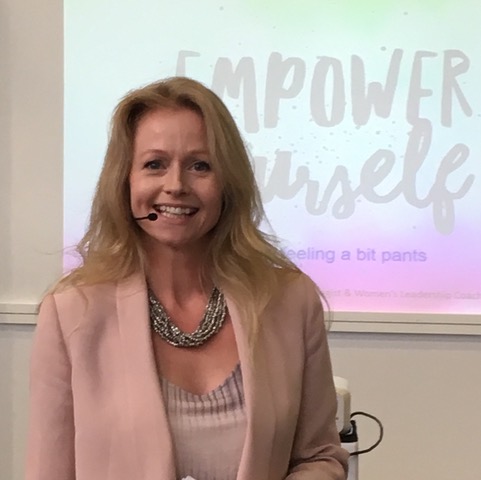 When I was living in London, I’d spent the last 3 years trying to set up a skincare business, and was living and breathing skincare. It’s a very competitive industry, and as a psychologist I realised that I wasn’t operating in my zone of genius. I was already starting to think about the juxtaposition of cosmetics and body image: how we feel about our appearance is fascinating to me. As a psychologist, I wanted people to feel better about themselves but the whole cosmetics industry preys on people’s insecurities.

When both my parents died it provoked a massive cleansing period for me: de-cluttering so that I could move on. I shut up shop on the skincare business, returned to what I know best, helping to empower women via corporate work and running workshops for women in my community, which I had already started running back in London. Moving from London was part of that cleansing, resettling to a more rural environment.

Tell us where you are now and how your brand has changed?

Living in London was fast paced and exciting. I was a member of Sister Snog which was an inspiring and uplifting group of women who were ambitious and supportive, but not competitive. We lived in central London for our last year so it was a very high energy, diverse community. I then transitioned to the least populated county in the UK where our street has an average age of 65! Two third of them are retired people: eccentric sometimes, certainly educated. We have a labour life peer as our neighbour, together with a former Harvard professor. It’s a liberal arts based community and life is a much slower pace. I catch myself having to plan an extra half hour to get to the bakery up the hill as I always have to stop to talk to neighbours who want to know what I’ve been up to. They’re not nosey, just genuinely interested.

The most dramatic change for me, is me, they way I see myself and the way I want others to see me: I used to be very careful to put on a polished façade, I’ve totally let go of all airs and graces. I now talk openly about things that used to give me a sense of shame (feeling flawed, and unworthy of love) and I shine a light on the inner critical voice – we all have one, it’s natural, but if you don’t know how to manage it, you can learn to believe what it says is real. So this is the real me. I’ve even renamed my Instagram as the Real Jess Baker. I talk about the nitty-gritty bits of life; how it is to be human.

This happened over the last five years as a lot of it was about my needing to recalibrate my relationship to my mother who had narcissist personality traits. My mother saw me as an extension of her, so I was never asked what I wanted or needed. Leading up to 2013 she had always called me five times a day and I would not only jump, but ask her how high. I wanted to please her to gain her approval. Our relationship was always tense; while she loved me she wasn’t capable of showing it in the conventional way. It’s probably why I got into psychology: I wanted to solve our relationship, fix it so that it could be better.

Then, later on, she had dementia before she passed away. Although deeply tragic and very upsetting for everyone, this was also a very healing time for me. I learned more about myself through forgiveness, compassion and acknowledging myself as separate from her. Suddenly, I was allowed to be me and the only person I needed approval from was myself. I want to inspire other women through my work, but how could I do that if I wasn’t inspiring myself?

My partner always planned to sell the family home when his son went to University and we had always planned to go to Sussex or the south coast. We have lots of friends there, it’s easy to commute, so it was a logical place to go. Then, one weekend we were invited to a weekend in Shropshire to stay at a lovely house owned by John Osborne and we were gobsmacked at how beautiful the landscape was; truly shire-esque, with its soft rolling hills and tiny pubs.

We played with the idea of living here in an original cottage or a rural croft where I could hold retreats on empowerment. Eventually though we chose a cottage in town which we can lock up and go. And while this wasn’t our original countryside idyll, it’s perfect for us. We can zip down the high street on our mobility scooters in 30 years’ time!

We planned a one year transition period. This gave me a chance to get my head around the move, and to plan where I’d spend my time week by week. It also allowed us time to tell people. I went six months thinking about how I was going to maintain this high energy London life (my partner is older than me so it wasn’t same for him). I think that was just about six months in denial! I had bought this beautiful furniture: every item handpicked to fill up our new home, and suddenly wanted to be there. We also got to know the local community so well. It was inevitable that I would end up here full time. One of the main things was realising that although I met a lot of people in London, they didn’t all live in London either. It was a place where we convened. I already did a lot of chatting on Skype and Zoom so used that more. Of course, people are always welcome to drive the four hours to see me!

My partner, who knows me extremely well. He’s a psychologist too so together we analyse and pick things to pieces. We take long walks together to clear our heads, and it’s during these long walk we plan our next ventures. It’s a precious time.

How do you feel now that you’ve made the change?

I have a quality of life I didn’t realise was possible. Weirdly, we are in the middle of Cardiff, Birmingham and Manchester which means I have access to corporates in more areas than when I was confined to London. I’ve also raised my profile locally, running events and workshops, and one woman drove for over an hour to get to one. That’s very special.

Take your time and consider your location, we did it over a four year period. We had already seriously contemplated Sussex. It was more practical but after someone pulled out of the chain when we were due to exchange we asked our self where would we really love to live if we could live anywhere? We both said Shropshire. It made no logical sense, but it works.

Think about what you will gain not just what you might lose. What can open up when you get there and what can you open up? I’ve been running workshops around confidence and assertiveness with chocolate meditations for instance. I get to serve my community and contribute and become part of that community, rather than rock up in a wheelchair when we’re ready to retire!

Thanks for such an inspiring interview, Jess!