Each month I give my verdict on who has shown the world an interesting and distinctive brand. This month marks our final “Brand of the Month”, which goes to…

I’ve had a soft spot for Lewis Hamilton for a while now. My father, a former race car driver, and I had the thrill of meeting him (briefly!) at the Goodwood Festival of Speed in 2009, where he captivated audiences with his charisma and some mean donuts. Since then, he has become one of the greatest race car drivers of all time. 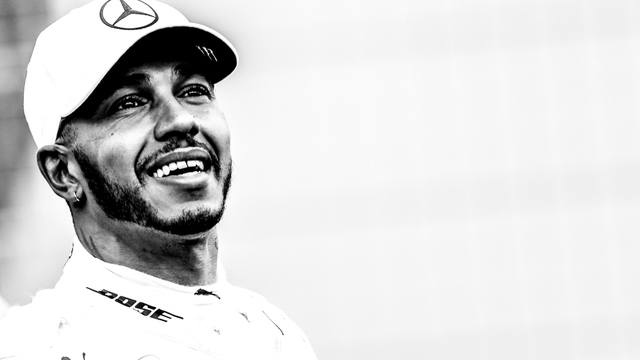 It’s been a historic year for Hamilton. Just earlier this month, he was voted the 2020 BBC Sports Personality of the Year. He equalled Michael Schumacher’s record of seven world titles and surpassed the legend’s record of 91 grand prix wins. He also recovered from Covid-19 this month, and still managed a podium finish in Abu Dhabi after 10 days of isolation.  Not to mention that just today, Hamilton has been knighted in the Queen’s New Year Honours list!

As today’s honour has recognised, there’s a lot more to Hamilton than his passion for motorsport and mad skills on the track. And you don’t have to be an F1 fan to know exactly what he stands for. Here are three ways Hamilton exudes the core attributes of a strong brand: passion, purpose, vision, values, and most importantly, authenticity.

As the first and so far only F1 black driver, Hamilton uses his position to shine a light on issues of racism and inequality. He hopes to increase diversity in motorsport and the power of sport to bring positive change with the Hamilton Commission, a programme he created last year.

When asked about any concern about risks associated with his activism in a BBC interview, Hamilton explained: “There is no way that I could stay silent. And once I said that to myself, I didn’t hold any fear.” He also stated, “People talk about sport not being a place for politics but ultimately it is a human rights issue and that is something we should be pushing towards. We have a huge, amazing group of people that watch our sport from different backgrounds and cultures and we should be pushing positive messages towards them, especially for equality.” His Mercedes team have largely backed Hamilton in his messaging, and have even painted their trademark silver cars black for this season, a symbol of their commitment to inclusion and diversity. 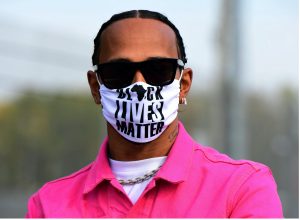 Over the past year, Hamilton’s visibility as an activist has increased dramatically, particularly with the emergence of the Black Lives Matter movement. He participated in the BLM march earlier this year in London, in demonstrations before every grand prix, and has promoted anti-racism messages by wearing slogans on the track. Like an increasing number of the most influential celebrities, he is actively and visibly using his fame to support the causes he believes in.

Hamilton’s sense of passion and purpose has also fuelled his performance, sharing that the Black Lives Matter movement helped drive him to achieve his seventh F1 championship. He described on BBC Radio 4’s Today programme having “extra drive in me to get to the end of those races.” He went on to explain, “It was a different drive than what I’ve had in me in the past – to get to the end of those races first so that I could utilise that platform [for Black Lives Matter] and shine the light as bright as possible.”

Although race car driving is admittedly not an obvious “green” platform, Hamilton has voiced a commitment to lead a more environmentally friendly lifestyle and to reduce his carbon footprint and this has the potential for also delivering his message to an audience who might not otherwise hear it. He is a vegan, insists on being transported to and from airports in electric vehicles, and has also sold his private jet. He no longer drives his supercars, only his electric Mercedes EQS. Hamilton also owns a team that will compete in the Extreme E racing series for electric cars, which will hold its first events next year. 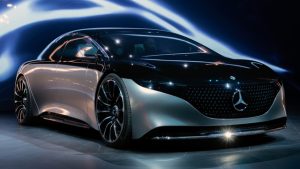 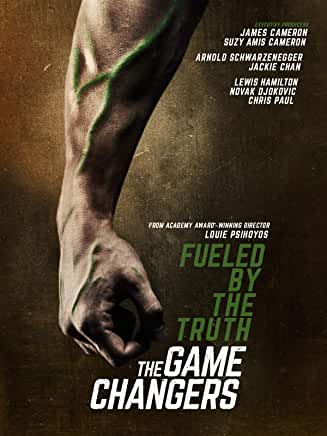 The Game Changers can be found here on Amazon.

Hamilton went vegan after watching the 2017 documentary “What the Health.” He has since become an advocate for animal rights and uses his social media platform to inform fans about animal welfare issues. In one hard-hitting post showing a pig with her piglets dumped in a dumpster, he wrote: “We all have a voice, I have this platform and so to not use it correctly would be wrong [of] me. Nobody is perfect, I certainly am not but this is actually happening every day to so many animals worldwide.” He frequently mentions that going vegan was “the best decision” he has made and that he’s “healthier and happier” than ever.

He has also taken on various projects, including being an executive producer of The Game Changers (2018) on Netflix – a documentary about vegan eating, protein, and strength. He also puts his money where his mouth is, backing the Neat Burger chain, a plant-based restaurant which will be expanding in the UK and to the US. 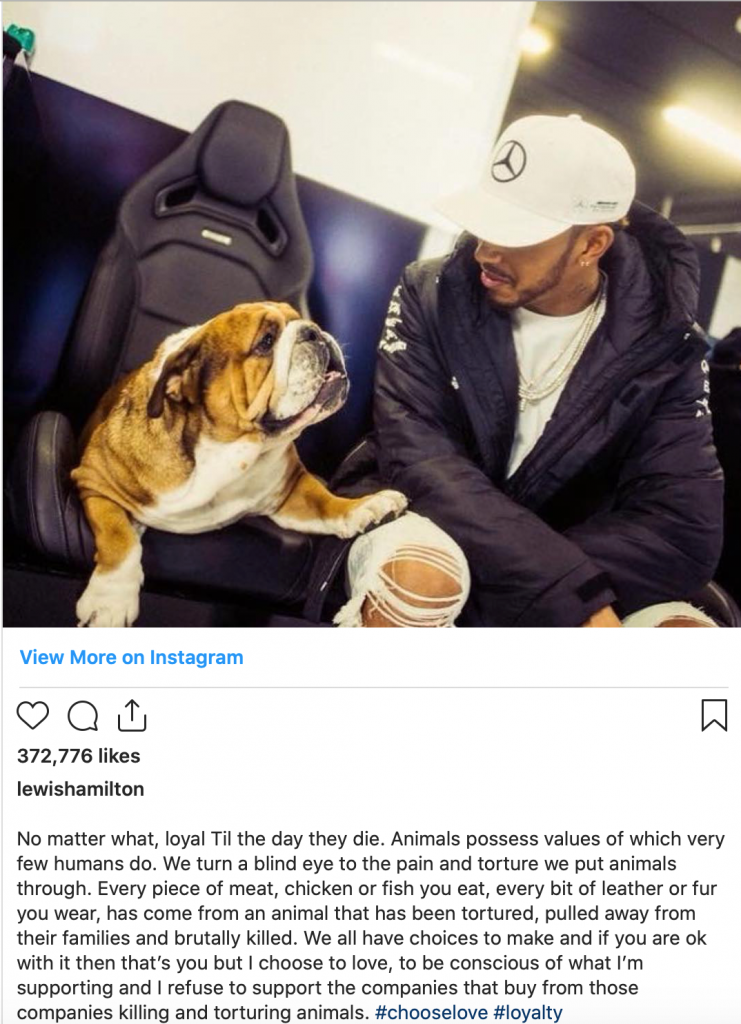 So what does the New Year hold for Hamilton?

“I’m trying to find a balance. I like to live life day-by-day because you just never know when your days are up,” he shared in Autosport.com. He further reported in a BBC interview, “The happiness and success of winning these championships is a wonderful thing, but it’s short lived.”

No matter which direction he decides to pursue, Hamilton is sure to leave a lasting legacy, one that will inspire generations to come and perhaps even make a broader contribution to our world. 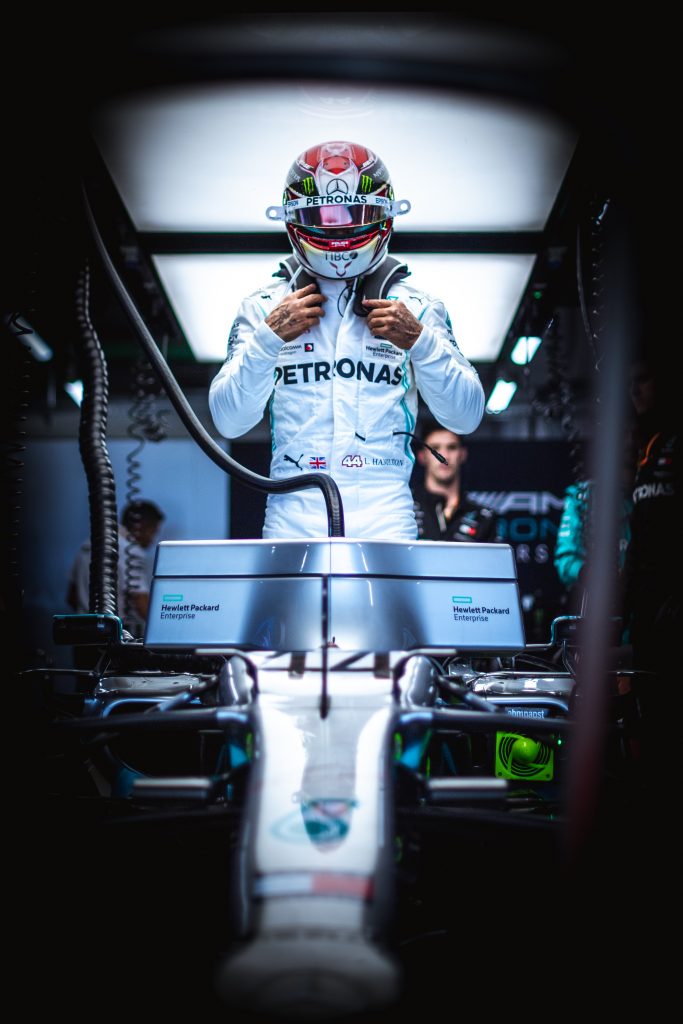 I couldn’t think of a more appropriate end to this series. Talk about going out with a bang!