Posted on October 29, 2020 by goldennotebook

Each month I give my verdict on who has shown the world an interesting and distinctive brand. This month, for Halloween, I’ve decided to feature a Brand Legend:

While Brand Legends come in all shapes and sizes, they tend to have the same ingredients; they are highly differentiated, unique, compelling, relevant, and certainly memorable. It just so happens that one of our most famous classic monsters, Frankenstein, fits the Brand Legend bill. He has worldwide, trans-cultural appeal, not to mention one of the most recognisable faces in history! Given it’s Halloween, I thought I’d ask a real-life Frankenstein enthusiast to shed some light on this Monster Mega Brand. Here, I interview Comedian, Musician, and Radio Personality Scott Douglas, AKA Scott Ian Von Frankenstein, to help us “dissect” Brand Frankenstein. 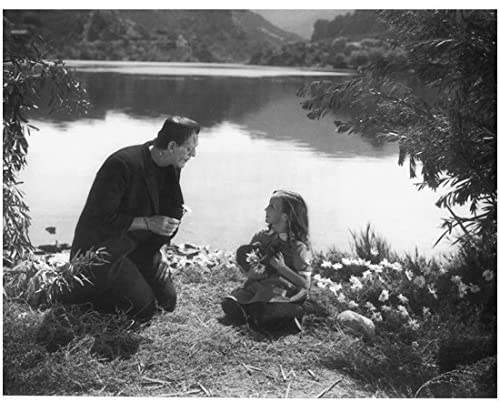 Boris Karloff as The Monster with Marilyn Harris as the little girl in Frankenstein. Photo available on Amazon.

What, in your opinion, makes Frankenstein such a Brand Legend?

I would say the larger half of it is due to the Universal Studios horror films and Jack Pierce’s monster design. It was a huge departure from previous looks the monster had on stage, screen, and in art: boxy, lanky and gaunt, but still very human, ill-fitting jacket, flat head, neck bolts and everything.  And that is still the basic design everyone would recognize at nearly every store this time of year. I would also have to put a large amount of his appeal into the empathy James Whale added to the monster in Frankenstein (1931) and maybe even more so Bride of Frankenstein (1935). Those films really speak to feelings of alienation, sadness, and really show the monster’s depth of feeling. The Doctor and the villagers are the real villains of the films. Many of the other classic monsters have similar circumstances that make them far from evil. The Gillman has his natural habitat infringed upon. The Wolfman was a victim of a curse that caused his change, he had no control or memory of what he did during the full moon. Dracula, not so much. Maybe iron deficiency?

At the core, do you think the Frankenstein we know today is the same character that Mary Shelley created, or has pop culture shaped his brand into something very different?

I think it is drastically different. His physical appearance is wildly more bizarre and disturbing in the novel, he speaks eloquently as the novel goes on, and so forth. I think the biggest change took place in the 50’s and 60’s (which effectively came with a name change, from Frankenstein’s Monster to simply calling him Frankenstein). The 50’s and 60’s really started the craze of “Monster Kids”. At the time television was showing the old films more and more often. Theaters were dusting off the old prints to show horror marathons for the new enthusiasts with costumed creatures as the special guests. Then magazines, toys, and all sorts of collectables pushing the needle closer to where we are now.  “Monster Mash” is still a Halloween radio standard and Frankenberry cereal has made up a least 15% of my Instagram feed all month. 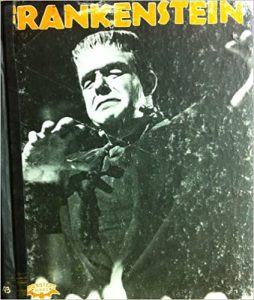 Crestwood House “Frankenstein” Monster Series can be found on Amazon

How did you get hooked on him? Is there a story?

My grandmother’s bookshelf had these fantastic Crestwood House Monster Series books. Just simple children’s books with each volume being based on a different movie monster, add to those a few of my uncle’s remaining monster magazines, and daily Munsters re-runs I was basically hooked for life.  My mother and grandmother would always come up with fantastic costumes, but for reasons beyond my control, that simple boxed Collegeville or Ben Cooper Frankenstein mask and smock was always more alluring. Why wouldn’t Frankenstein wear a smock with his face and name on it? Made sense at the time.

In what ways in particular do you find him compelling?

Even from the earliest age my family constantly moved, leaving me feeling like an outsider wherever I had to restart. That lonely sadness, no feeling of belonging anywhere, is something that definitely attracted me as I got older. Even the wild take in The Rocky Horror Picture Show (1975) had a wonderful effect on changing my life and view of the world, yet still ends tragically for the Doctor and his Creation.

How has he inspired you over the years? How do you use that inspiration in your own personal brand?

Frankenstein always comes back. Even the Monster Squad (1987) where things seem to be leaning towards a happy ending for Frankenstein, he ends up being pulled into an endless void. It’s a constant cycle of life and loss, defeat and reinvention. To me, that’s about as inspirational as it gets. 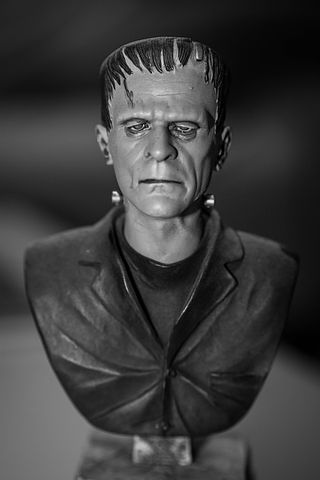 Your Facebook name is Scott Ian Von Frankenstein. Using his name is some pretty serious co-branding! How else do you co-brand with him?

I’ve been dressing like the classic Frankenstein solidly since 9th grade. Boots, jacket, tee. My first set of tattoos were asymmetrical stitches on both my wrists and a lightning bolt. In high school I had my first two stage names. As a solo musician I was The War of the Frankensteins, in bands I was Scott Prometheus Jones. It just continued from there.

Compared to other classic horror movie characters, what makes him so likeable/relatable, compared to, say, Dracula (is it his human or gentle side that we know is in there somewhere?)?

I would say it’s about his child-like confusion and vulnerability.  Dracula was a human at one point, too, if you follow most vampire lore. So I’d put it more on the fact that he’s considered a monster without any nefarious plan or intentional harm.  He just reacts to the way people react to and treat him.

Is there a favourite Frankenstein tag line?

I’m going to go with two of my favorites to show the difference in dialog between the novel and early films.

Do you have a favourite or little-known Frankenstein fact that you’d like to leave us with?

In the novel, the reanimation was simply glossed over and left to the imagination with the Doctor working in secret in his closet. When James Whale was preparing for his film, he gave the lab design duties to studio electrician Kenneth Strickfaden. Strickfaden’s work was so impressive it became one of the film’s most unforgettable scenes. Pieces were used for years in dozens of films. The machinery was given its final starring role in Young Frankenstein (1974). 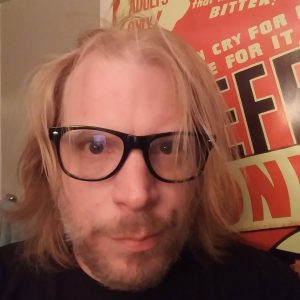