For the last decade, Ed Sheeran has been a powerhouse. In fact, he was just named the UK’s artist of the decade by the Official Charts Company. This milestone came on the heels of a combined run of 12 number one singles and albums between 2010 and 2019 – more than any other artist. During this period, he’s held the most weeks at number one (79 weeks in total) on both album and singles charts.

Impressive indeed, but that’s not why he’s my Brand of the Month.

Sheeran also decided to use launch his own foundation, the Ed Sheeran Suffolk Music Foundation (ESSMF) to help young musicians in his home county with “small but hopefully useful grants” that can be “used for anything from buying an instrument to funding music studies”.

Fantastic stuff. I’m a huge advocate of adding social responsibility into your brand. But there’s something else that shone through this month — his announcement to take a break from music — and for me, it aligned beautifully with his authenticity.

In a vast sea of shiny pop stars, Sheeran has always stood out as our boy-next-door, maintaining a sense of genuineness in all aspects of his brand. His songs in particular capture that authenticity, connecting with listeners in an honest and powerful way.  Sheeran’s last album, No 6 Collaborations Project, essentially represents his struggle to maintain this authenticity while globetrotting and hobnobbing with “the beautiful people”, preferring to be back at home with his wife. Perhaps this was another signal to his audience that it was time for a break.

There’s a refreshing authenticity to knowing when to step back, put yourself first, and take a take a break from it all.

This month, I wrote about brands that “step back instead of stepping up”. Like Prince Harry and Meghan, Sheeran may be stepping back this month, and in a way that will likely strengthen his brand. His announcement to take a break from work and social media “until it’s time to come back” on the back of his wild success is a surprising but understandable one. Then it’s about how you deliver the message.

Unlike Prince Harry and Meghan, Sheeran’s communication isn’t constrained by Buckingham Palace of course. He also doesn’t risk upsetting the balance of an entire institution with his announcement! While the messaging may have been less challenging, the decision behind it likely wasn’t an easy one.

Sheeran’s Instagram profile picture has been changed to a black-and-white image of BRB – for “be right back”. 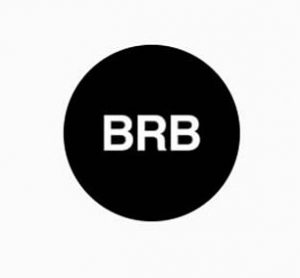 There’s another probable factor in his decision, reflecting an important dimension of branding: knowing when you are satiating your target audience. If you are, you risk losing them.

Sheeran’s manager Stuart Camp seems to get this. He admitted that Sheeran’s ubiquity ran the risk of “overkill”. “We are very conscious of too much Ed Sheeran,” Camp told BBC Music Introducing’s Does My Music Suck? podcast.

To “know thyself” is an important part of authenticity, and authenticity is an important part of personal branding. This includes knowing your limitations, knowing when to disengage, unplug, and knowing when to take care of yourself. It comes from the opposite place of ego (which certainly could have been inflated given recent accolades!). This also involves having an honest look at when to step back when becoming “too much of a success”. And ultimately, that’s not a bad problem to have.