Here’s why…
Earlier this month, Prince Harry announced via Instagram his plans to co-create and co-produce a landmark TV series about mental health with Oprah Winfrey. The documentary series will be screened worldwide in 2020 on the Apple TV+ online platform.

The mission of the series is to help end stigma over mental illness and “empower those who silently suffer” with mental health conditions to seek help. According to a statement from Kensington Palace, the project hopes to inspire “honest conversation about the challenges each of us faces,” adding that it aims to equip people “with the tools to not simply survive, but to thrive.”

Just a word about co-branding here, which is an important aspect of personal branding that often gets overlooked. Co-branding is essentially a partnership between two brands (or organizations) that leverages each other’s reputation, and in turn can amplify awareness about a certain product, service or cause. If done right, co-branding can give your personal brand a powerful boost.

Let’s take a peek at what’s behind their co-branding magic. Yes, these are both hugely popular mega-brands (and yes, both met through Meghan Markle), but are a few more variables in this co-branding equation.

A strong thread that binds this co-brand is a longstanding commitment to ending stigma and raising awareness around mental illness. Winfrey has devoted quite a bit of air time across various media platforms to topics of mental health, whether that be on her own blog, over interviews, or on TV. Her brand stature and commitment to highlighting various societal challenges have allowed her to shine a consistent spotlight on issues such as mental health stigma.

On to Price Harry. In a former Brand of the Month, I featured the co-branded team of Prince Harry and the Duke and Duchess of Cambridge, who spearheaded the “Heads Together” mental health campaign in 2017, which aims to tackle the stigma surrounding mental illness. Harry’s  Apple TV+ collaboration with Winfrey will build on this work.

The core of our personal brands – our passions, sense of purpose, values and vision – shape the direction of our brand. In previously writing about Winfrey’s personal brand, I describe her as a “total package”; she combines these core attributes  with her charisma, emotional intelligence and authenticity to create a magnetic force.

If we turn to our co-brand and their discussions about their joint venture, we get a solid sense of their shared attributes, fueling their mission and propelling their sense of commitment.  Winfrey shared with “CBS This Morning” that their collaboration began after a conversation in which she asked Harry what the most important issues impacting the world were. “He said climate change and he said mental wellness, mental fitness, mental health.” Winfrey then caught his interest when speaking of the series she was working on for Apple. “He said at the end of the conversation ‘If there is anything I can do to help…” she recalled.  She further disclosed that the pair held secret meetings in London to collaborate on the project.

Of their collaboration Harry shared a values-laden statement, “Our hope is that this series will be positive, enlightening and inclusive — sharing global stories of unparalleled human spirit fighting back from the darkest places, and the opportunity for us to understand ourselves and those around us better.”  He further shared on his Instagram, “I truly believe that good mental health — mental fitness — is the key to powerful leadership, productive communities and a purpose-driven self”.

Striking a similar message, Winfrey shared “Our hope is that it will have an impact on reducing the stigma and allowing people to know that they are not alone, allowing people to speak up about it and being able to identify it for themselves and in their friends.” 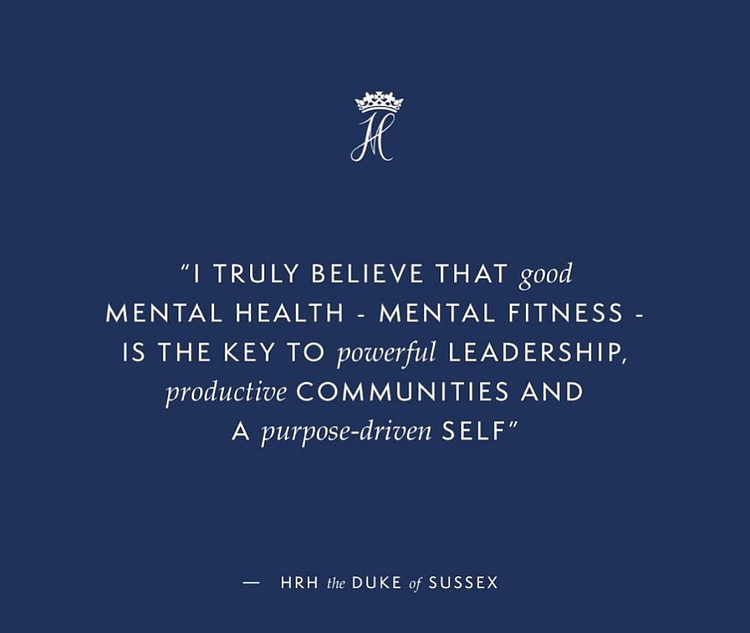 Both Harry and Winfrey have shared their own personal stories of struggle.

Harry disclosed how he struggled to cope with his mother’s death on The Telegraph’s Mad World podcast in 2017: “I can safely say that losing my mum at the age of 12, and therefore shutting down all of my emotions for the last 20 years, has had a quite serious effect on not only my personal life but my work as well,” he shared. “I have probably been very close to a complete breakdown on numerous occasions when all sorts of grief and sort of lies and misconceptions and everything are coming to you from every angle.”

Winfrey has also been open about her history with depression. In an interview with ABC News, Winfrey talked about a depressive episode was triggered after her film adaptation of Toni Morrison’s “Beloved” in 1998 turned out to be a box office flop. Winfrey not only starred in the film but also bought the rights to the book. She explained that “[depression] is more than ‘I feel bad about this.’ I felt like I was behind a veil. I felt like what many people had described over the years on my show, and I could never imagine it. What’s depression? Why don’t you just pick yourself up?” Similar to Harry, in sharing such personal experiences and her own beliefs, she is not only disseminating information about mental health issues but also normalizing them.

Perhaps most importantly, they are both seizing a unique brand positioning opportunity; a way to leverage the power of their brands to make a much needed and meaningful impact at the right time. Given their personal disclosures, this also takes courage.

Winfrey’s power to influence public opinion has been named “The Oprah Effect” by CNBC. It’s been shown that this effect works particularly well with consumer purchasing choices, and chances are it will work equally well with public beliefs about mental health. Winfrey and Harry’s joint endeavor is another example of her impeccable timing, what Matt McGarrity, a speech teacher at the University of Washington, described as Winfrey’s kairotic response: “In ancient Greek, kairos was a sense of time. Chronos was the ticking of the clock; kairos was the “opportune moment.” That chance to say just the right thing, in just the right way, at just the right time.”

Winfrey has said herself that her partnership with Apple TV+ offers a “unique opportunity” to tackle the “daunting challenges of our time”.  And Prince Harry is also tuned into this sense of kairos. “What I know is, if we do our jobs right, we’re going to replace shame and we’re going to replace stigma with wisdom, with some compassion and with honesty”, Harry shared.

As a psychologist of course, I consider their mission a very near and dear one.  And I just know that the power of their joint voices will resonate with many.