Earlier this month, we saw the unveiling of the highly-anticipated December issue of British Vogue, the first under new editor Edward Enninful. Many have hailed Enninful’s appointment as a much needed change in the fashion world, with his cover marking the dawn of a more diverse era in the industry. Instead of playing to the latest fashion or celeb trends, Enninful’s cover features a retro-esque image of Ghanaian-British model Adwoa Aboah.

Enninful, Ghanaian-born himself, took the helm of British Vogue in August, following Alexandra Shulman’s 25 year run. The former stylist was considered a progressive choice; he’s not only the first black, and first male, editor in the magazine’s 100-year history, but he’s from a styling background to boot! 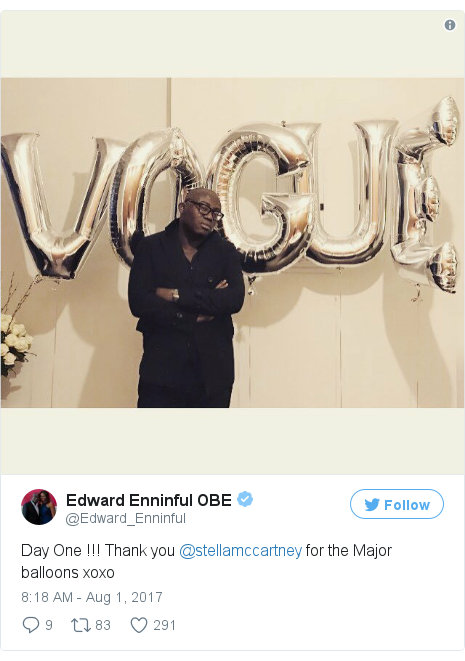 Here’s what I find most striking about his personal brand:

His ability to shake things up

First and foremost, this starts with his vision to make fashion more inclusive.

Vogue has been on the shelf for over a century now, serving as the industry’s fashion bible. Given the industry has faced much criticism in the recent past for its lack of diversity, perhaps Alexandra Shulman knew it was time to bring in someone who could shake things up a bit.

Since his appointment was announced in April, Enninful has been busy making changes by bringing in a more diverse and unconventional line-up of models and contributors. He’s hired director Steve McQueen, models Naomi Campbell, Kate Moss and Adwoa Aboah, and legendary stylist Grace Coddington as contributing editors to name a few. We’ve also seen a number of senior figures leave the magazine in what The Times described as a “posh girl exodus”, part of Enninful’s plan to diversify British Vogue.

Hannah Rochell, acting fashion editor at the London Evening Standard, shared that “Diversity is something [Enninful] is very keen on championing, as we’ve seen in the past with his work, so I think that’s definitely something that will be welcomed in the fashion industry as a whole”. This was also echoed by Joe Casely-Hayford, a long-time London-based designer: “In order to progress, we need to challenge the status quo. This is something that Edward will bring to Vogue. It’s the real essence of fashion – it’s fashion, not frocks.”

He also shakes things up with his ability to think outside the box.

In recent years, traditional glossies such as Vogue are arguably being overshadowed by social media platforms as the frontline of fashion. Enninful seems to be well aware of one of British Vogue’s biggest challenges: the magazine’s digital presence. As advertisers and designers now have far more platforms to choose from, they are more likely to target celebs who might wear their labels on Instagram and Twitter. Digital copies of British Vogue remain low compared with the physical sales, while Teen Vogue online, which speaks a different language, has been a huge success.

After Enninful took the helm, the first thing Vogue announced was that the mag was joining Snapchat. Video content such as YouTube is also ripe with potential; perhaps choosing director Steve McQueen for a contributing editor also reflects Enninful’s efforts to increase British Vogue’s impact in an online world. It may be early days, but Enninful is starting to make some nice initial strides here.

Enninful, who grew up in London with his five siblings and mother, a seamstress, went on to quickly become a name in the fashion world, hanging with bestie Naomi Campbell and consulting on major fashion campaigns such as Christian Dior, Calvin Klein, and Dolce and Gabbana. His foray into fashion started at a surprisingly young age; at 16, he was scouted as a model and became the youngest ever assistant on i-D magazine that year. He then landed a full-time job as fashion director of i-D at the ripe age of 18.

He went on to study at Goldsmiths University alongside his modelling career. Some of his fashion career highlights include:

Serving as contributing editor of Vogue Italia in 1998 and spearheading the ‘Black Issue’, featuring only black models such as Jourdan Dunn and Naomi Campbell.

And now he’s taking the helm at British Vogue. Out of all of his stellar accomplishments, this seems to be the most surprising. Among a sea of candidates that included seasoned fashion editors, the stylist-turned-editor’s nomination for the post appeared to send shock waves through the industry. As one applicant told The Telegraph; ‘We felt like we’d entered Crufts and the cat won.’

I for one cannot wait to see what this cat does next!