Here’s why:
Most people will recognize Harry as lead singer of Blondie, one of the most iconic New York bands that grew out of the seventies. At age 71, Harry herself remains very much an icon, with her face being one of the most recognizable in punk pop history. Earlier this month, Blondie have released their new album, Pollinator, and Harry teaches us a thing or two about being a brand legend.

She broke the mould (mold if you’re American!)…and continues to break it
Harry fled her New Jersey suburban home to the Big Apple and never looked back. She chose to follow her desire and pursued music instead of settling down and having a family. In 1974 she formed Blondie with guitarist Chris Stein. Even Blondie’s music was nonconformist; never neatly fitting into one genre, they created a new sound that would launch them into fame. Blondie even dabbled in the early evolution of hip-hop, with Rapture becoming the first number one hit song with rap in 1980.

One of the few female artists to top the charts at that time, Harry paved the way for later acts like Madonna.  Now 44 years on, Harry continues to follow her passion, releasing what is being described as Blondie’s best album in years…a “rebirth” in Harry’s own words.

She’s the real deal
Harry is refreshingly authentic, talking openly in interviews about everything from plastic surgery to sexuality. Now in her seventies, she has reached a new level of comfort with her body, sharing with the Sunday Times Magazine, “Would I be naked onstage all the time now? Probably. It might horrify everyone, but…”. Talk about shattering taboos of older women and sexuality!

She is also a uniquely socially responsible brand. Inspired by Elton John’s philanthropic work, Harry began using her star power to help causes ranging from fighting HIV and cancer to endometriosis. Her philanthropy also extends beyond humans. She also recently shared her desire to help the bee community, stating at the Elle Style Awards that she and Vivienne Westwood have committed to donating towards bee conservation (note that the name of her new album is Pollinator).

She’s not afraid to express her opinions
Although she’s not a political person by history, Harry has found her political voice in this current climate. As she told the Sunday Times Magazine, “I don’t feel like I have to be an asshole and say stupid things like ‘Bomb the White House’ [a reference to Madonna’s speech a the DC Women’s March early this year], but I am speaking out on politics now. I’m sleepless since Trump’s election.”

Harry further shared with the Evening Standard Magazine; “I don’t like the idea of promoting fear to gain popularity. It’s so ugly.” She adds,  “I don’t want to go backwards in time; I don’t think isolationism is a good thing at this time in history. I think he’s an idiot.” Harry ultimately hopes that music will spark a political movement: “There’s gotta be a resistance of some sort — a protest,” she says. “Music is about to regain its edge.”

She’s a coveted co-brand
When you are as big an icon as Harry, amazing collaborations seem to happen naturally. Arguably her most famous co-branding is with Andy Warhol. 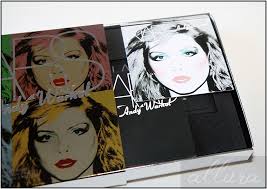 She of course continues to be a muse for the artists of today, including street artist Shepard Fairey.

It’s no surprise that her musical collaborations are equally impressive, including those of her new album Pollinator, where she worked with the likes of Sia, Charli XCX and The Smiths’ Johnny Marr.

And last but not least…

She has a fierce outer brand
The days of older women expected to “disappear into drab floral tents” are over, says Harry, who continues to experiment with her look. “I want to dress age-appropriately, but I also love those funky younger looks – and some days I think I pull it off better than others.” She advocates using the advances of medical science and believes cosmetic procedures “go with the job”. Harry also holds a particular mindset about aging: one needs to stay creative, curious and open. “You have to look around, keep new influences coming in. A lot of people sort of pick a world to live in, and they’re comfortable in that – which can be disastrous.”

And her recipe works: Harry is proof that style is timeless.