Here’s why…
I’ve decided to go light and tongue-in-cheek this month by awarding my dog Clyde Brand of the Month. 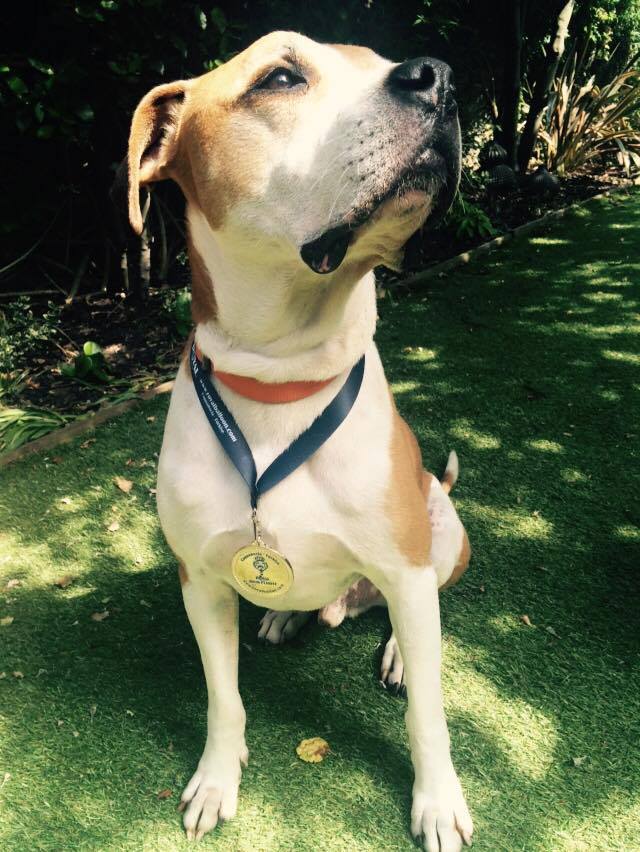 What makes Clyde’s brand so strong, you might ask?

You know exactly what he stands for.
Clyde has simple yet strong values. For one, he’s incredibly loyal. He just wants to please and comfort you. After all, he’s proven himself again and again as a silent, strong support for his family during difficult times. This also reflects his dependability; he’ll always be there for you, offering his nonjudgmental, unconditional love and acceptance when needed the most.

He knows how to make a first impression. 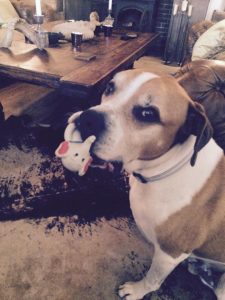 Clyde never greets anyone empty-handed (well, empty-mouthed); he will always welcome you with one of his prized bones or toys to celebrate your arrival. He’s always excited to see you, so much so that his powerful wagging tail is the most dangerous thing about him. Instead of a handshake, he will just quietly sit on your foot.

He has impeccable personal presence.
Clyde knows how to work a room, particularly if it’s a party. This has made him very popular with our guests (unlike our other little dog who needs to work on his branding and therefore doesn’t get invited to the party!). Like any considerate party guest, he also knows when it’s time to make an exit and go to his bed. 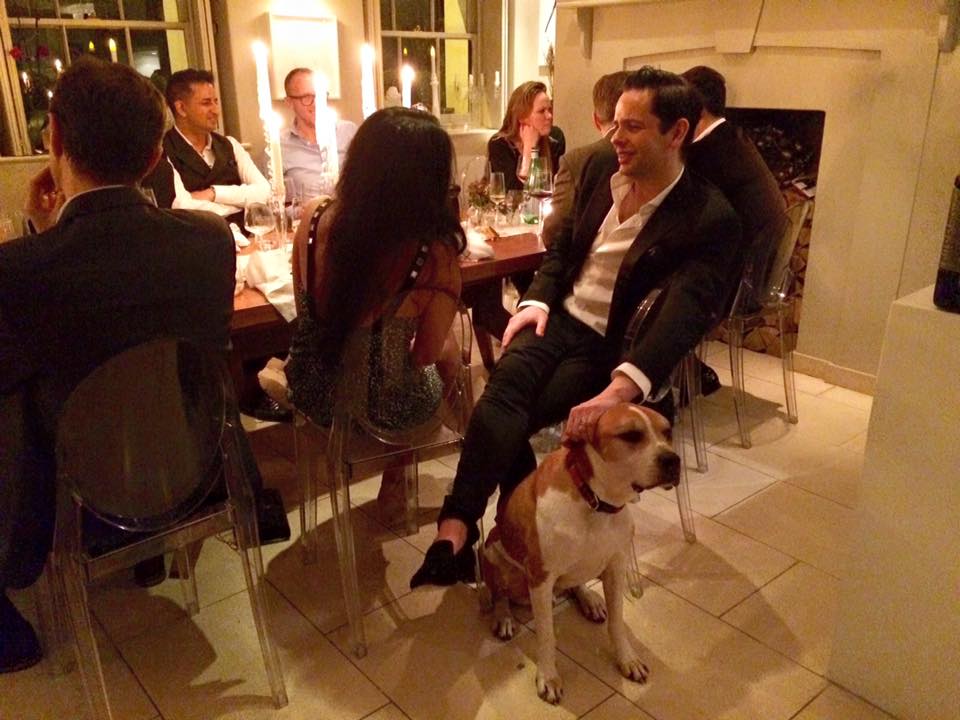 He has a good social media presence.
Clyde may not have his own Twitter or Instagram accounts, but his pictures get some of the most attention on Facebook. And while I’m the one curating his “digital footprint” (paw print?), his popularity is down to his cuteness and personality. He’s super photogenic and has some great faces.

His passion shines through.
Clyde loves a good squeaky toy or ball. Just the mere sight of these will bring a sparkle to his eye. He also adores runs by the seaside. But above all, he ranks food (pretty much any type), as his top passion. When particularly excited by the cuisine, he will literally sing for his supper, in addition to performing a few choice tricks. 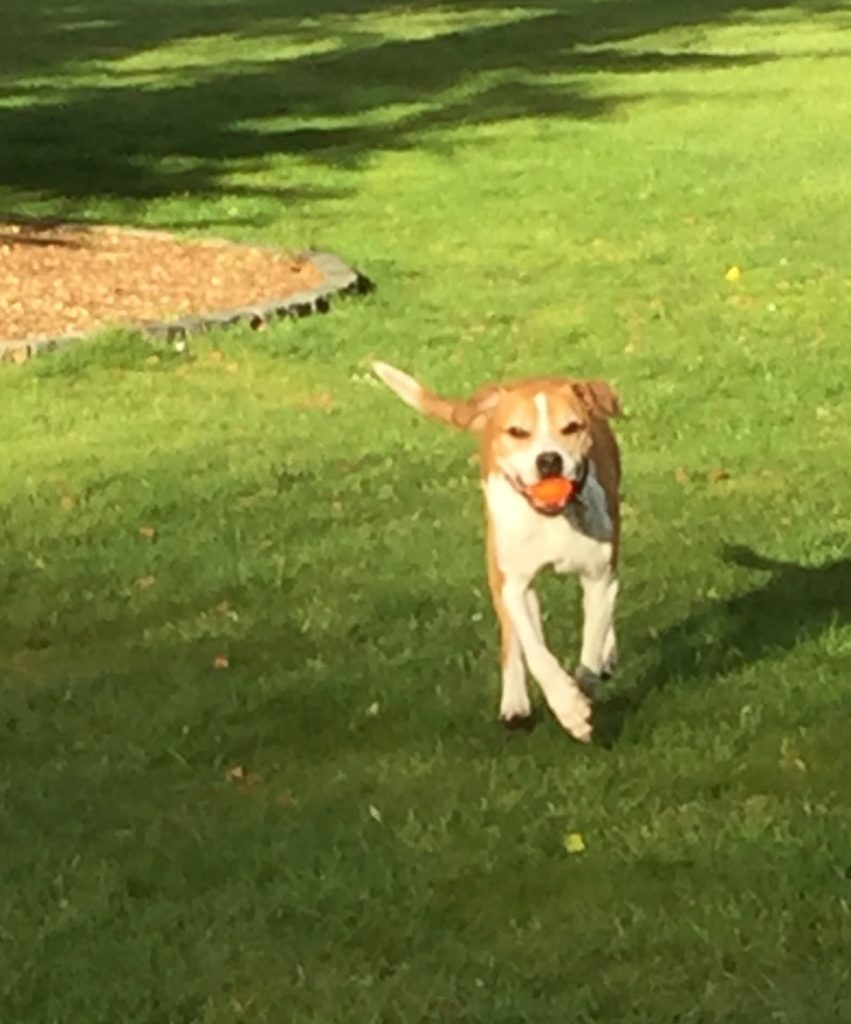 He knows how to leave his mark. 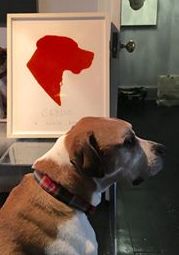 Well, in more than one way! Sure, he makes it a point to be remembered and has his own signature way of doing so when we go on walks. But he also leaves his mark through artwork.

He’s been a very willing subject for photo shoots and is proudly featured in artwork such as this Carter Kustera (for Jonathan Adler) silhouette.

His cute mug has also been captured in sketches, like the one below with his partner in crime Reggie (2016), which have appeared on Christmas cards (and in a frame in his papa’s office!). 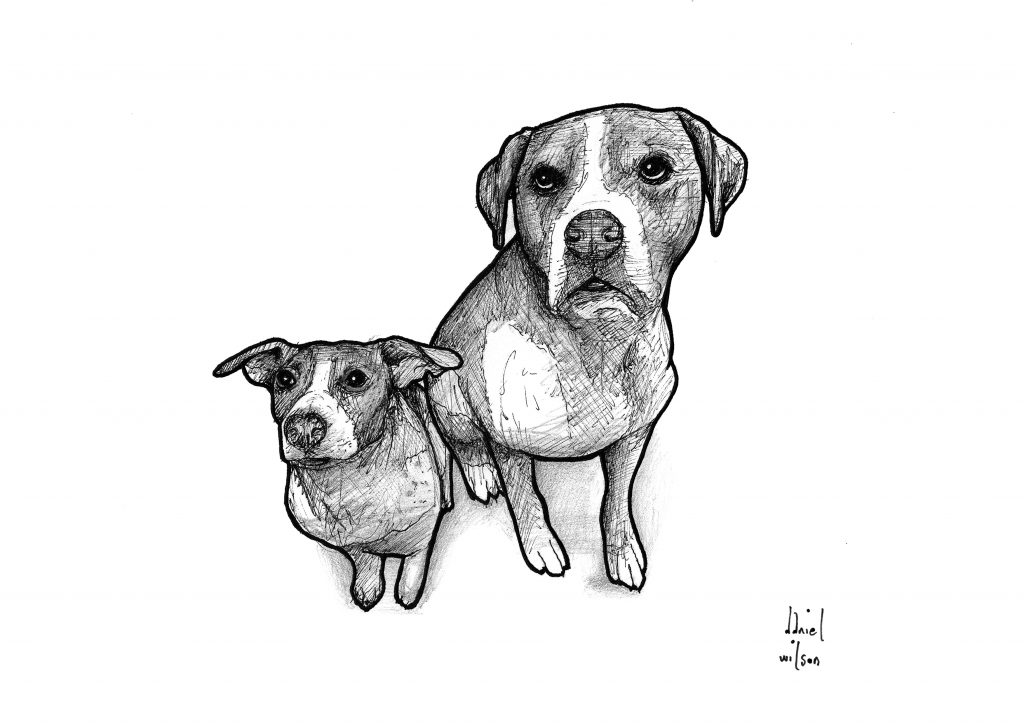 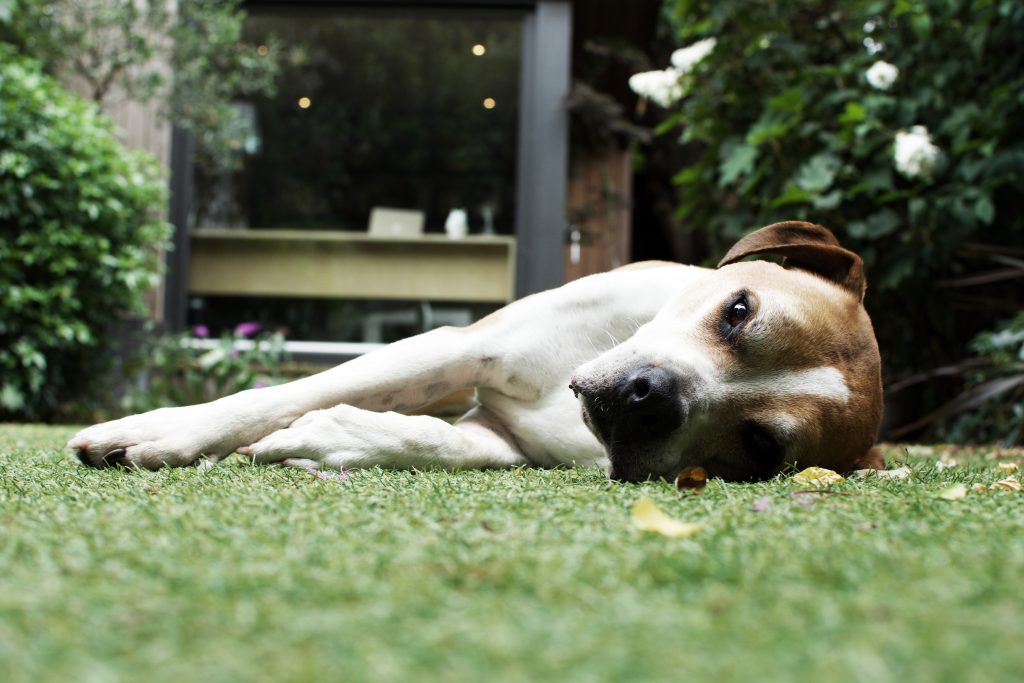 His story is one of resilience.
We rescued Clyde from the New York City ASPCA in 2006. He was in quite a state after what we believe was a year or two of severe neglect. Apparently his situation was so extreme that they filmed his rescue for an episode of “Animal Precinct” (not his ideal television debut). But Clyde proved to be quite a resilient guy, and he is now loving life in London! 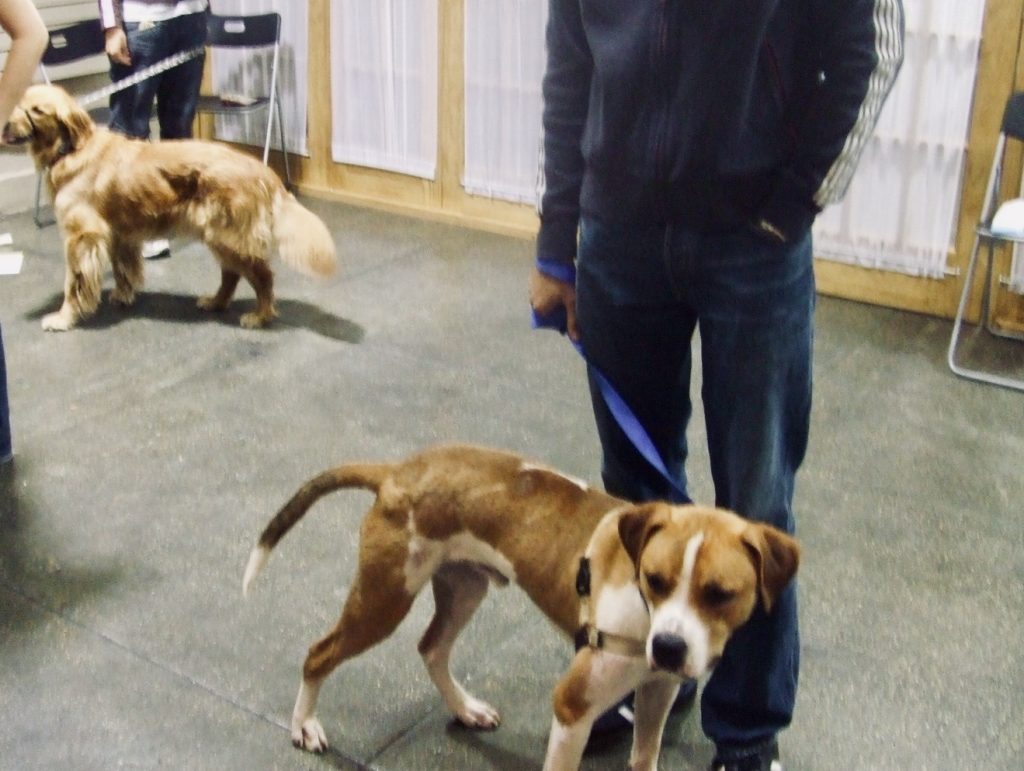 Time to learn some manners! Clyde’s first day at school. 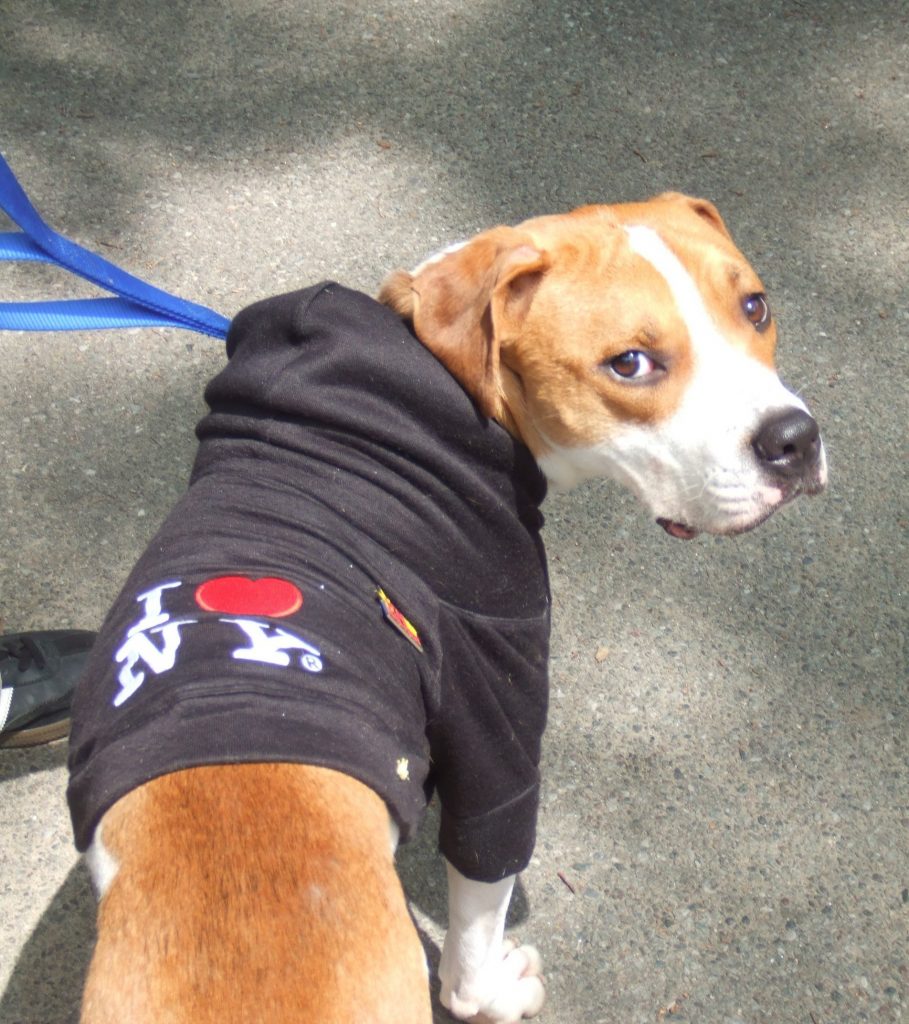 Clyde at a NYC AIDS walk shortly after adoption 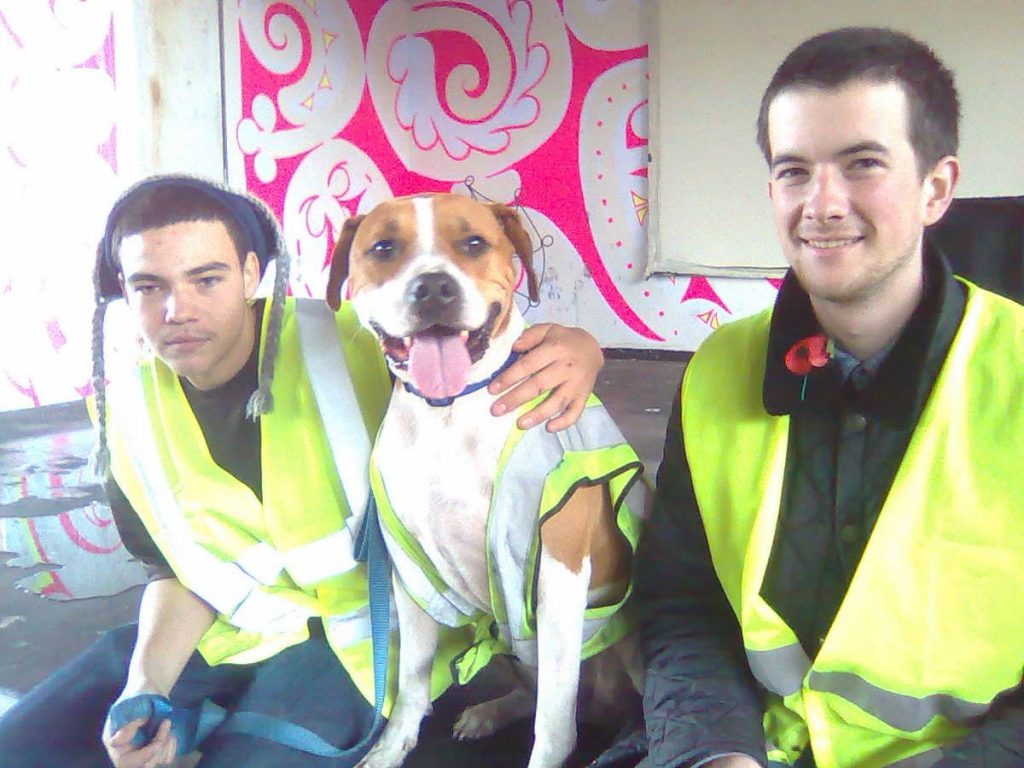 And a little known fact…he’s been in a theatre production!
Clyde participated in the hit experiential theatre production “You Me Bum Bum Train” a few years back. Even though he isn’t a pedigree kind of guy, he was handsome and personable enough to get cast as an “entry” for a Crufts dog show scene, with me and another friend as his handler. Although a little blurry, here’s the photo of him during his “onstage” debut. 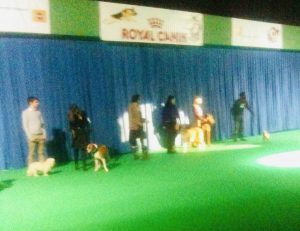 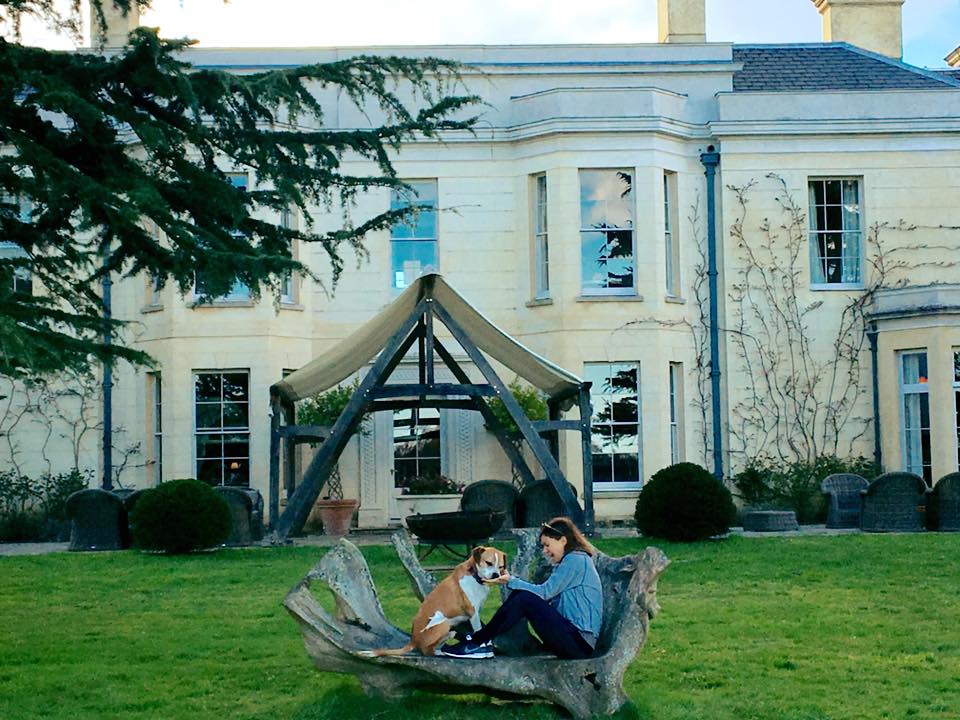