My Name is Prince: Telling the story of an icon

After the world lost Prince last year, I spent some time researching and writing about the legend and what elevated him to an icon. So I was curious to see if any retrospective could rise to the enormous challenge of telling his story. The My Name is Prince exhibit at the O2 in London rose to this task, and drew me even closer to him, as the best retrospectives can do. After all, the retrospective is perhaps the pinnacle of any given personal brand. A carefully curated exhibition of personal items that includes costumes, pictures, personal trinkets, instruments, hand-written notes, videos, quotes, and music… all strategically chosen items which define the person. We walk around as welcomed voyeurs, getting up close and personal with objects now known as artifacts, intimately exploring each and every corner of that person’s life.

My Name Is Prince is the first official Prince exhibition to open outside of Paisley Park, Prince’s famous Minnesota private estate. As the website boasts, it’s a rare chance to peek at the “hundreds of never before seen artifacts direct from Paisley Park. Visitors will get a unique insight into the life, creativity and vision of one of the most naturally gifted recording artists of all time.” 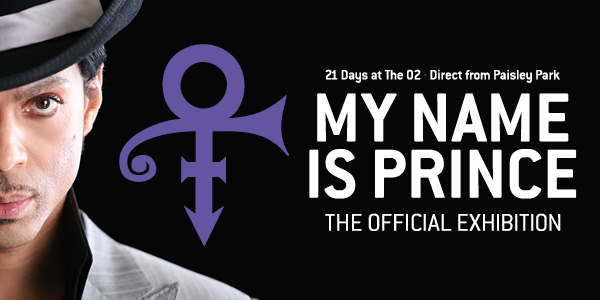 Personal branding is all making a name for yourself, and Prince did that brilliantly, even when his name was an unpronounceable symbol. At the heart of personal branding are the core attributes of passion, purpose and vision. Prince undeniably exuded all of these. Here are the ways in which I felt the retrospective communicated these aspects of his story:

It reminded us that he was a sheer musical genius, one with vision and purpose.
Prince’s panoply of talent is widely known, but this exhibit hit home just how prodigiously gifted he was. His debut album For You, released when he was 20, was produced, arranged, composed, and performed by Prince. He is credited with playing all 27 instruments on the album. His range of talent was that immense. The intent behind the album was to establish Prince as a musician and to prove his merits, and one can certainly argue that it went above and beyond that purpose. Perhaps this article says it best: “Prince didn’t develop into the kind of artist who could do everything from beginning to end. He started that way.” Not only that, but Prince had a vision from day one. As a teenager, he not only signed his first major-label contract with Warner Bros, but he somehow managed to get the mammoth record company to sign over complete artistic freedom to him, a rarity for even the most established artists. 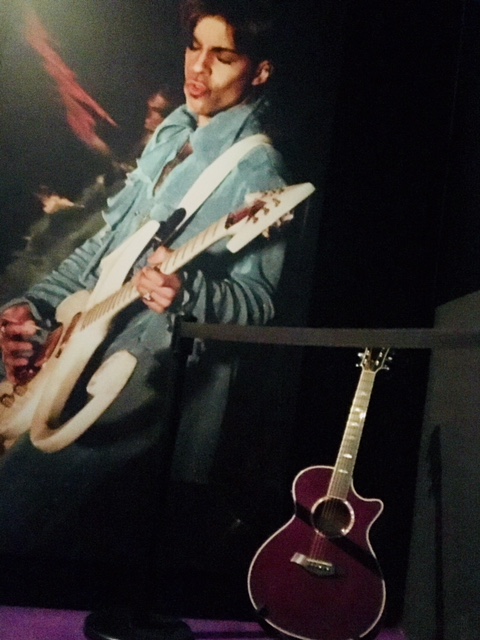 As part of the ‘VIP experience’, guests get to hold the guitar from his Musicology tour (with special gloves of course!)

An uncompromising artist from day one, Prince seemed to find purpose in creating and perfecting his music, and to do that, he needed to be hands-on. Prince would continue to be heavily involved in all aspects of his music, even after bringing in other artists, such as when he created The Revolution. In some of his most famous albums, such as 1999, he was still the main force behind most of the music.

As a visionary, Prince went on to redefine pop music in the 80’s, and continued to break barriers over the next two decades. Even rebellious moves in the 90’s (mostly against record companies), such as changing his name to the Love Symbol, proved to be genius avant-guard branding for Prince.

It demonstrated that he was almost inhumanly prolific.
Prince was so passionate about music that he seemed to live and breath it. His album covers adorn the walls of the exhibit, just under the ceiling; they surrounded you, like festive bunting, and capture the sheer magnitude of his musical accomplishments. Prince is of course most famous for his late 1980’s records, but he has 39 studio albums to his credit (mind you, that’s over a span of 37 years!), four live albums and multiple compilations. And let’s not forget all of the hits he wrote for others, including Sinead O’Conner’s Nothing Compares to You and The Bangles’ Manic Monday. He was also a songwriter for Madonna, Cyndi Lauper and Chaka Khan to name a few.

For Prince, commitment and passion went hand and hand. He not only released several hundred 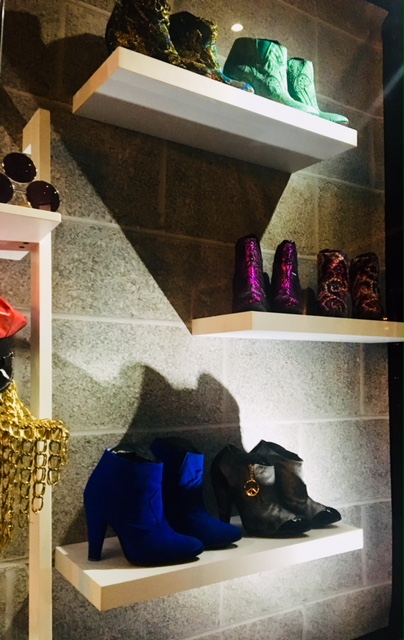 songs over a 40-year-long recording career, but it’s said that Prince challenged himself to write a new song a day. He left behind his legacy in a music vault in Paisley Park, which is said to house hundreds of unheard songs (Prince had shared with some in confidence that he saved his best work), along with more than 50 fully produced music videos that have never been released. Some estimate the vault’s treasures are “enough for a new Prince album every year for the next century. Whatever the exact figure is, it’s safe to assume that, even though he’s gone, his music will outlive us all.”

It showed us that he had one kick-ass outer brand.
Prince’s iconoclastic style was a big part of his brand. He often pushed boundaries with gender stereotypes; his range included straddling a motorcycle in leather to wearing glitzy and ostentatious suits with heels. The exhibition showcased 100 outfits, which were described as “a drop in the ocean” by Angie Marchese, director of archives at Paisley Park. She shared that “he kept everything he wore on his early tours, and the entire wardrobe from the Purple Rain tour and movie – not just his own, but every band member’s.”

Given his petite size (some report he was 5’2”, however the exhibition tour guides insist he was “5ft nothing”), he had a team of tailors on demand in Paisley Park, ready to make bespoke clothes for him. In spite of his size, Prince was able to create an effect that he was “larger than life”. This was likely accomplished by his powerful personal presence, gargantuan talent and showmanship, along with his flamboyant costumes. He also never performed without 3” heels, typically custom made to match his outfits. 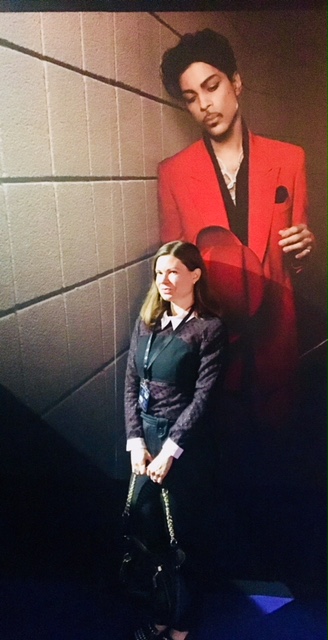 Larger than Life: “Backstage” at the exhibit

The exhibit tour guide indicated that Prince would often travel with a vast array of wardrobe selections, and would choose what he (and subsequently the band) would wear based on the type of mood and vibe he wanted to create. 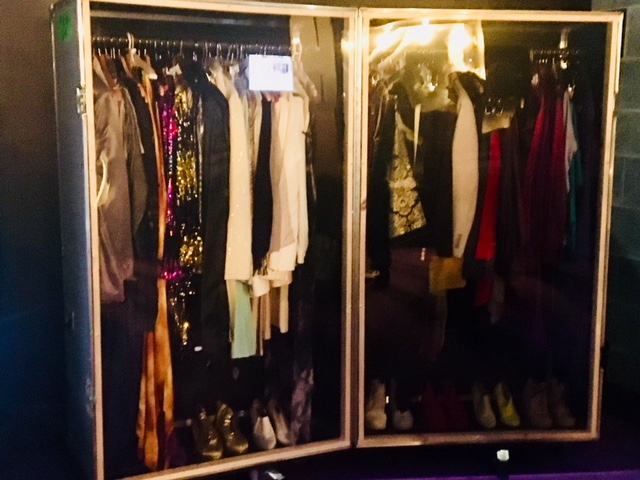 The road case at the exhibit from Prince’s Welcome 2 tour. It had been left just as it was found at Paisley Park. The last to touch the items was Prince himself.

Prince also created powerful brand associations with imagery. The Love Symbol was one, which, in the exhibit, was featured prominently on everything from his guitars to his hand towel. Even though he changed his name back to Prince in 2000, the symbol became inextricably linked with his identity. The other powerful association is with the colour purple. Since his untimely death, purple-coloured tributes have appeared across the world. Fans have adorned the gates of his Paisley Park studio with purple flowers and balloons. Prince, his symbol and purple are now together embedded deep in our psyches.

It shared his carefully curated his story, respecting the mystery shrouding it.
Prince was not only one of the most naturally gifted artists of all time, and he was also one
of the most mysterious. Throughout his career, Prince developed a reputation for secrecy and eccentricity. The exhibition respects this secrecy and purposely avoids giving too much of a personal glimpse into his mysterious lifestyle, while still beautifully capturing the personal brand of our mega-star.

Mystery is a key ingredient of great storytelling, and Prince worked this, while at the same time, actively controlling the brand image and story-line he put out there. He rarely gave interviews (he announced that he would never talk to the press again after an interview to promote 1999), yet after death he made his story easy to tell…on his terms. Before his death, Prince had already turned Paisley Park into a museum devoted to his career. Angie Marchese, director of archives at Paisley Park, shared with the Times: “Incredibly, most of what you see [at Paisley Park Museum] is as it was when we arrived. The murals, the theme rooms, the corridor of awards, the wall with a timeline of Prince’s influences and protégés, the closets containing memorabilia plastered with his pictures. He made telling his story easy because he’d put the story there for us.”  She goes on to say, “It’s clear he wanted to share his experience here.”

A piece of that experience is now accessible to us here in London, and there’s a good chance that this is exactly how Prince wanted us to experience him. 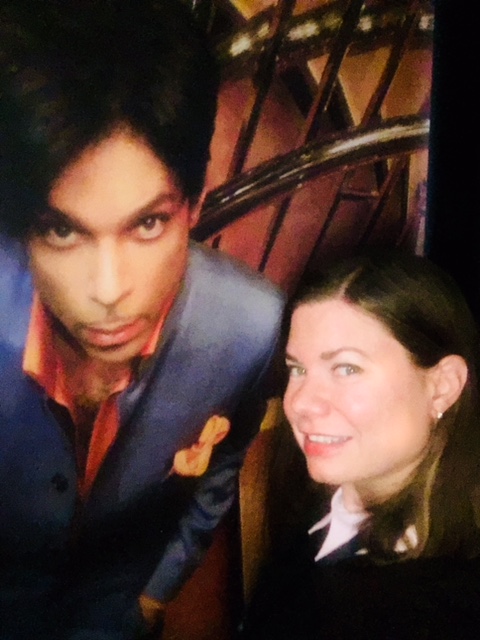 2 thoughts on “My Name is Prince: Telling the story of an icon”