Welcome back to our Step it Up Campaign, where our aim is to inspire others to become more active in charity work by sharing stories of social responsibility.

The Reverend Ingrid Scott (http://www.cbdifm.org/) is an Interfaith/Interspiritual minister who decided that as part of her ministry to do something more tangible for the benefit of others by setting up her own charity, the CBD Charitable trust http://cbdct.org/map.php

How did this happen?
“I’ve always been involved and believed in supporting  charities in some way. When I started work at 18 I started supporting Plan International, then added various other causes over time such as Amnesty International, YMCA and Friends of the Earth to name a few but, after coming through seminary,  I felt that in order to lead by example, I needed to show up and do more. So I established my charitable trust as I believe in encouraging people to be their best and highest versions of themselves and this is my way of doing that. 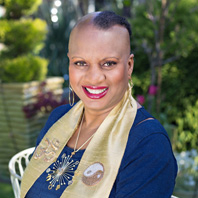 When I set up the charity I wanted it to be as wide and varied as it possibly could be, so that I could do the most possible good, and so it encompasses children, same gender issues, women, environment, spirituality, community, health, and education. CBD stands for Composition by Design: the act of putting something together with a purpose. So I’ve put together my charity with a purpose of making a difference in the world. I use Coutts the Bank to establish, administer and run the charity, they do the due diligence and the reporting back to the Charities Commission.

I open my house up sometimes several times hosting fund raisers via garden parties or clothes sales or New Years Eve parties to raise funds, to which my friends gladly let themselves get roped in to help, but the majority of the funds come from myself.”

What do you do for charities?
“I make the decisions as to where and who I want to help and work in collaboration with other charities who are my partners on the ground. So, for instance, on a trip to India I saw two women sweeping in the middle of a busy roundabout and intersection; they barely had their mouths and faces covered with the thin cloth of their sari and my first thoughts were “if the cars don’t get them, the pollution and dust will.” I found out that they were the Dallits – the untouchables, a part of society that are the poorest and the lowest of the low in the caste system!  They’re excluded from society and are not even allowed to  go into a Police Station if they are a victim of rape or assault!

I found a charity, The Lotus Trust, that works with these women and I gave a grant to build a women’s and girls Centre  that has taken them in and educated them so that they can sew and earn a lot more than they would previously.

The problem is that I get so many requests that even if I sold everything I have it would only be a drop in the ocean. It can be heart-breaking; but nevertheless I must do what I can.”

Why is this a good fit for you?
“I like making decisions. I choose what who, when and why. It suits me. On a professional level, as a Minister when I create a bespoke a marriage, funeral or any other type of ceremony my fee goes straight as a donation into the charity and it’s a great win win for everyone.”

What do you get out of it?
“I’ve worked since I was 18 and paid a lot to the Inland Revenue over that time: the thought of the Inland Revenue putting some of that to good use was just too sweet to turn down. I’ve also been exposed to more projects that I would just helping the already well known and bigger charities that have the ability to market themselves! I’ve made more fulfilling connections with people and been blown away by what people are doing out there. I can’t measure what I have gotten out of it. Just knowing that I have made a difference, and not just thought about it, fills my heart and feeds my soul beyond words.”

What would your advice be for anyone doing this?
“If it’s setting up your own charity, I’d say get professional help if you can afford it. As I mentioned, I use Coutts. But, as for helping, anything, however small, everything is needed. You may think giving £5 is hardly worth the bother but £5 can feed 50 children a bowl of rice for a day,if you check out goodgifts.org you can see what as little as £5 can do either in this country or abroad!

It’s not about waiting for “when I have time or money”: the time and the need is now!”

Please check back often for more Step it Up interviews,
and get in touch if you would like to share your own story!