Capturing an inspiration: Filmmaker Bridie O’Sullivan on creating the documentary Zandra with a Zee

As far as unique personal brands go, Dame Zandra Rhodes certainly ranks up there. I’ve had the privilege of interviewing Zandra about her brand, and have experienced firsthand just how magnetic and inspirational this British icon is.  Next year, Zandra will dazzle us with her 50th anniversary show, and to mark this milestone, a feature documentary about Zandra Rhodes is now in production.

Here, I chat with filmmaker and photographer Bridie O’Sullivan, a former student and personal friend of Zandra’s, to learn more about her documentary Zandra with a Zee, and how we can help make it happen! 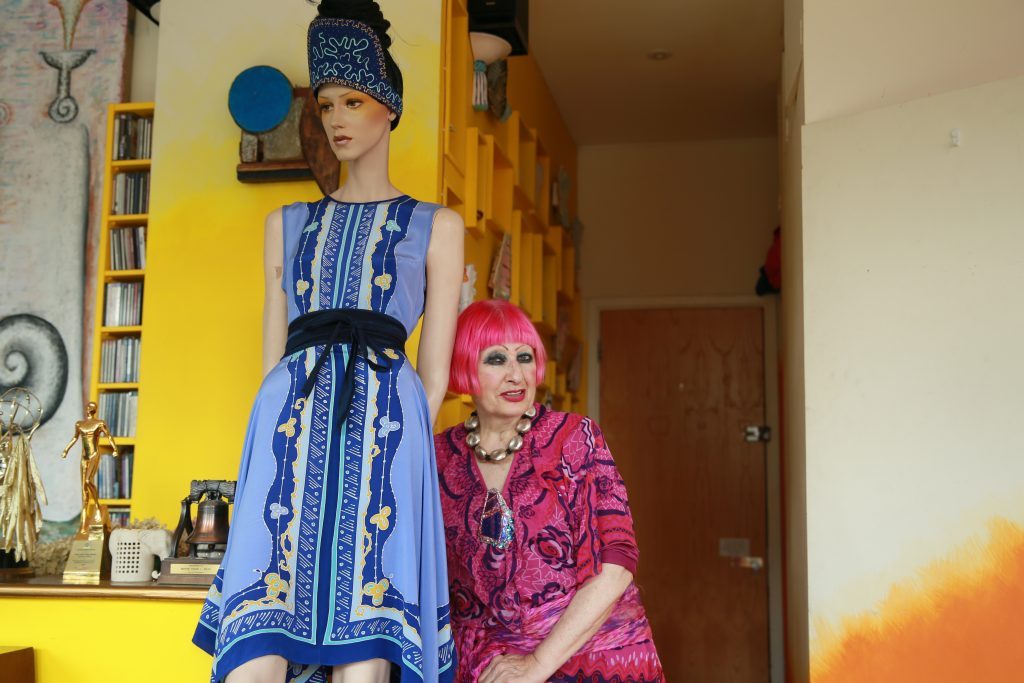 Bridie, you’re taking on quite an ambitious project at the moment. Tell us a bit about it.

The film will take us behind the scenes during the run up to Zandra’s 50thanniversary fashion show in 2019, showing us everything from the early stages of research as she forages through her vast archive and looks elsewhere for new inspiration, through to the nail biting last minute backstage changes at the catwalk show itself.

Along the way we will dive into Zandra’s colourful personal history and own archive as she recalls some of her most iconic designs for royalty and rock stars – from the Japanese state banquet dress for Princess Diana featuring cherry blossom, to Donna Summer’s dress featured on her album cover, Bianca Jagger’s glam Studio 54 dresses, Diana Ross’s after party outfits and Freddie Mercury’s white pleated Bohemian Rhapsody cape, and tells the often hilarious or poignant stories behind them.

The film will also take an intimate look at the person behind the brand, as she deals with life concerns about aging and legacy, witnessing how the threat of illness and familial pressures take their toll on her professional life.  In the course of this journey we will examine Zandra’s history as one of Britain’s most revolutionary designers, and understand how she managed to maintain her single-minded creative vision for more than 50 years in the harsh fast-paced landscape of the fashion industry. 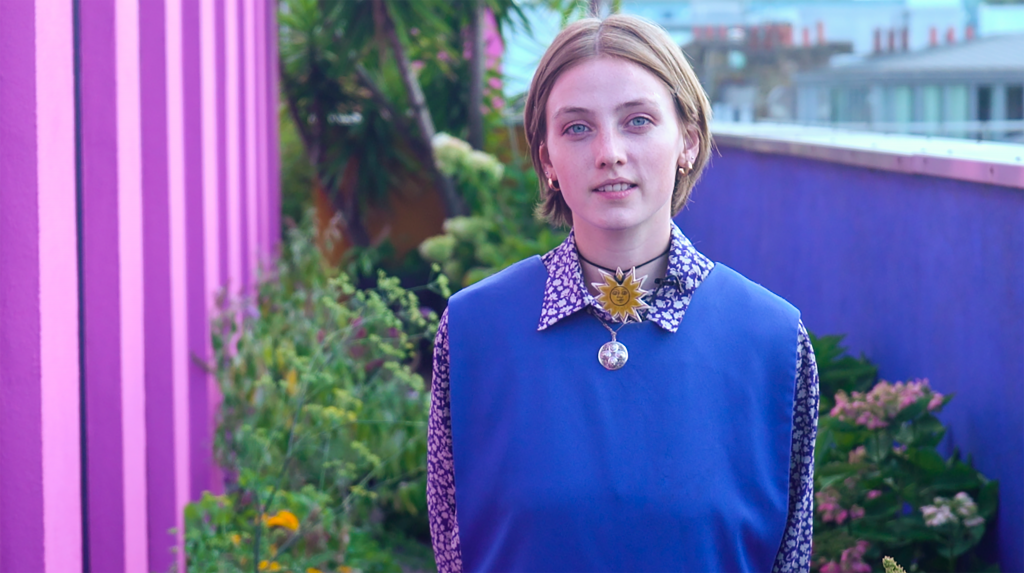 Bridie O’Sullivan in her documentary Zandra with a Zee

I’ve had the privilege of interviewing Zandra in the past about what an amazing and unique personal brand she has. What was it about her that specifically motivated you to do this documentary?

I have worked with Zandra since I was a 16 year-old student (so nearly 10 years in total now). The documentary is something I started four years ago when I was experiencing my own mental health issues. The process has been a massive journey of discovery and healing. In an attempt to understand Zandra’s own quirks and coping mechanisms, I have started to understand my own, so naturally the film has mental health aspects in relation to coping, ageing, family dynamics and survival with a lot of humour along the way.

I was motivated to tell this story, as in the current global crisis it will bring the fantasy and hope of
Zandra’s work and teachings to a wider audience, along with showing the beauty of creativity and community. During my difficult battle with mental health, it was this very family unit of support, creativity and fantasy that got me through. This is why this story is so important for me to tell, as it is not just a film about the legendary designer’s life. It is a story of an unconventional family. Zandra’s slightly eccentric mothering/bringing together of people is at the center of everything. It goes beyond the constructs of what success is in terms of the industry and looks to the legacy of people she has taught to buck against the norm. The core of this film looks at the meaning of what it is to be vulnerable and human. It looks behind the fabulous chiffon armor we construct for ourselves.

What about Zandra do you personally find the most inspirational?

It’s definitely her fearlessness, in being herself and creating designs be damned what others think or say.

How has she specifically shaped your personal brand as a creative?

For me Zandra encompasses so much, especially when it comes to growing and finding my feet as a creative. Use of colour, texture and fantasy are definitely massive ones! But I think underlying everything is her teaching about truly looking at something when you’re drawing. I have brought this in to all elements of my film and image making. 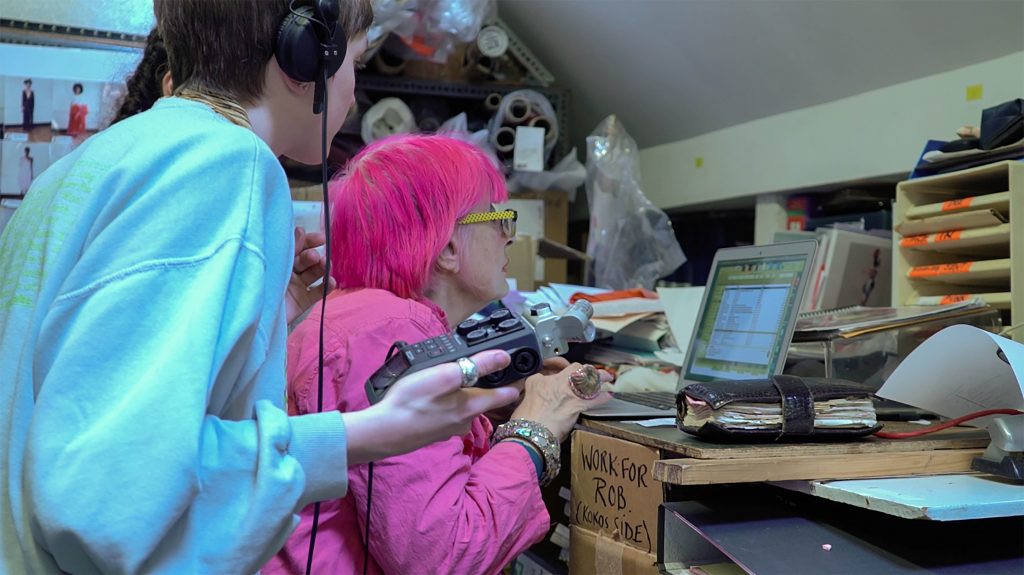 Zandra and Bridie in action

In what ways do you feel the documentary will capture her unique and authentic personal
brand?

I feel the documentary will capture her unique hands-on approach to design from her travels and sketchbooks, revolutionary take on pattern cutting and her love of analogue. It will also capture her eccentric, youthful, transformative, gritty and humorous spirit, which is such a vital part of what makes Zandra Rhodes.

In what ways will the documentary reflect your own personal brand and story?

In a lot of ways this documentary will reflect more then I could ever say. It marks my journey from adolescence into adulthood, my battle with mental health into recovery. In regards to my brand the process has taught me to have a voice and not to be afraid of being vulnerable.

Last but not least, tell us about how others can get involved and help make this documentary happen!

Check out our crowdfunding page, where there is more information on how your donations will help complete the film. We are also offering loads of amazing one-off perks; from vintage signed and numbered posters all the way up to a couture dress and fitting with Zandra herself.

Zandra With A Zee [WT] – Tigerlily Productions – Crowdfunding from Bridie O’Sullivan on Vimeo.

We really look forward to you becoming part of the family and thank you for supporting a young British filmmaker!

One thought on “Capturing an inspiration: Filmmaker Bridie O’Sullivan on creating the documentary Zandra with a Zee”