Behind the Cameras: Personal Branding and Directorial Style in Cinema

We know in personal branding that one’s personal brand is the entire perception of a person. However, oftentimes, the particular style used by creatives such film directors can dominate their personal brand. They become known for their distinct cinematic style, which in many cases, becomes synonymous with their reputation.

Our guest blogger this month is Felix Hockey, film student, blogger and freelance writer, who talks about how directors use the unique style associated with their personal brands to build a reputation with their target audience.

For many, the director of a film often helps us guess whether or not the film will appeal to our tastes, or not. Often seen as the authors of their work, many directors are known for a certain aesthetic or thematic style throughout their career that becomes an integral part of their personal brand. For example, when one thinks of The Grand Budapest Hotel and Rushmore’s Wes Anderson, pastel colours, symmetrical shots and deadpan dialogue are likely to be some of the first things to come to mind. David Lynch, on the other hand, inspires a completely different expectation; a dreamlike quality, Noir-ish storylines and general confusion on what is actually going on.

With directors becoming known for specific elements, this allows for fanbases to accumulate around them. For instance, there are many eagerly awaiting the upcoming film Once Upon A Time in Hollywood simply because of the involvement of Quentin Tarantino. Yet expectations around the consistency of a personal brand can be a double-edged sword. In 1997, Tarantino followed up his massively popular Pulp Fiction with Jackie Brown, a slower paced crime film based on the novel Rum Punch by Elmore Leanard, rather than one of his original screenplays. With many expecting something more like his previous work, the film’s achievement was both critically and commercially disappointing. In recent years, however, Jackie Brown has been frequently championed as the director’s finest work. Tarantino has not made an adaptation since, however, and has arguably never strayed as far from the style that became associated with his personal brand again.  Similar issues with personal branding expectations can be seen in the response to Martin Scorsese’s Silence, with many reviews pointing out the film’s lack of swirling cameras, and whip smart dialogue one would expect after seeing his various films set in America, like Taxi Driver and Goodfellas.

There are some directors who have been able to change their style and keep a strong personal brand, however. Woody Allen began his film career with sketch-like comedy pieces like Bananas yet, over time, he branched into making more narratively structured comedy like Annie Hall. And then even fully serious dramas such as Match Point. Whilst Allen still often makes comedy pictures, however, Kathryne Bigelow has completely abandoned her place as a creator of eccentric genre pieces along the lines of Strange Days, in order to pursue films that have far more political and social themes, leading to her winning the best director Academy Award for The Hurt Locker. Other directors don’t seem to have a defining style at all. It could be argued that one wouldn’t be able to tell if a film was directed by the likes of Robert Zemeckis if one wasn’t aware, as his work is so varied, spanning everything from Back To the Future to Forest Gump to animations such as The Polar Express.

This all ties in to ideas about auteur theory in film studies, an idea that came to force around the 1960s but is still widely contested. Brought forth in post-war France, the auteur theory allowed focus onto the director as the main creative force rather than the writer, producer or studio. This has been disputed by a number of critics, however, as film is usually a much more collaborative medium than literature or painting and therefore it can be argued that the end product cannot be attributed to just one person.

In certain instances, its still not the director who is seen as the main creative source. The films Eternal Sunshine of the Spotless Mind and Adaptation are directed by Michael Gondry and Spike Jonze respectively. Both these men are well known directors with decades of work behind them yet these two films are more widely known as the works of the screenwriter Charlie Kaufman. Similarly, Richard Curtis is also often more recognised than the directors of his screenplays, due to his staple of writing romcoms like Notting Hill.

Certain studios also seem to maintain a consistent brand irrelevant to the director. Marvel have allowed themselves to achieve success after success by keeping to a certain aesthetic and tone. This can also be seen in smaller studios such as A24 who are beginning to be known for the horror films they release, such as Get Out and Hereditary.

The idea of a director as a tell-tale sign on whether it will meet people’s tastes, however, remains a strong point in both reviews and advertisements. Perhaps it is easier to see an individual as an author more than a collective; one can have a more personal connection with a person, or at least the illusion of one. 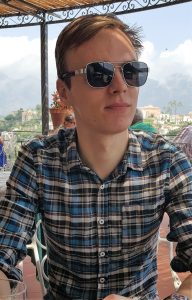 To learn more about what Felix does, you can connect with him here.